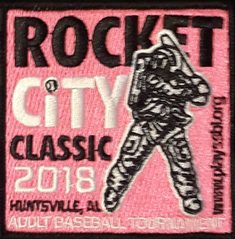 Alden Stiefel was the “Iron Man” for the Lonestars on the hill, pitching complete games in both the Semi-finals and the Championship game. He gave up one (1) run in 18 innings, struck out 13 and only had seven (7) hits against him. An incredible performance!!

The Lonestars hit .597 for the weekend. Their offense was led by Eddie Fuller, Tom Behringer, Adam Guzman, Mike “Hammer” Baskerville, Keith Thomas, Sam Pacheco, Jim Gonzales and Manny Ocampo. Eddie Fuller, Andy Bowie and Sam Pacheco also had standout defensive tournaments. They made play after play and wreaked havoc on the base paths on offense along with Tom Behringer.

tournament. Walter De La Rosa also did the yeoman’s part of the catching duties for the Lonestars and was a rock behind the plate. Alden Stiefel was also behind the plate when he was not on the bump.

The SA Lonestars are looking forward to returning and defending the crown in 2019. Huntsville is great city to play a baseball tournament in, it is a first class experience.