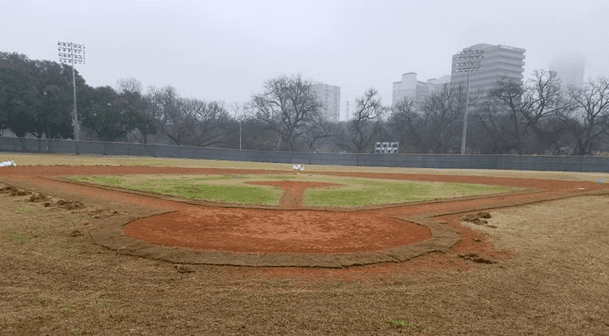 March 3, 2019…Imagine waking up early on a Saturday morning after a night of imbibing a gallon or so of Lone Star, eating well-beyond a recommended serving of belly-ache inducing snack(s), and going to bed only a handful of hours before the sound of your alarm clock surged into your eardrum and made it feel like a Mötley Crüe concert were playing inside your head. Now, tack on the fact that the reason you were waking up early was to head out into the dreary, drizzling, 40ish degree weather to perform physical labor for multiple hours in a park known for aggressive homeless folk encounters, public fornicators, and hastily jogging yuppies. 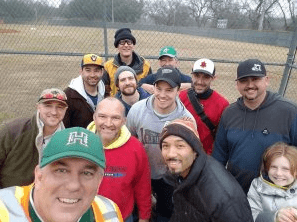 A sane person might say this sounds terrible and ask “Why would anyone do that?” This isn’t just any park though – it’s a park sporting an aging baseball field. Why would we do this? Well, we’re baseball players, and our unadulterated love for the game leaves our sanity in question every now and then! Sanity issues aside, this was a fantastic opportunity for the gentlemen of the North Texas Amateur Baseball League to both give back to the community and spruce up one of the beloved fields on which our teams play. The name of this field is Reverchon Park – a baseball diamond that has seen 100 birthdays and hosted countless levels of play from high school to pro barnstorming games.

Though we love the park, the field itself most certainly needed a lot of work. The base paths down the 1st and 3rd base lines were so crooked, you practically had to ballet dance your ass down them in order to avoid running out of the baseline. Excess dirt was surrounding the infield grass, causing uneven surfaces and lots of bad hops during games. The ground itself was so hard that you could practically skate across it with your metal spikes – or sprain your ankle so badly that you had to wear a boot for 6 weeks (believe me, I’d know). The bullpens were essentially foxholes better suited to fend off an enemy infantry attack than to warm up a pitcher. The paint in the dugouts was chipping away, revealing a color that could only be described as “depression.” And if the clouds so much as spit on the dirt with rain, it would flood the field and turn it into a glorified swimming hole. So, yes, this field had a few issues.

But that didn’t hinder our determination! Armed with piles of dirt, pallets of sod, 50 lbs. bags of red topdressing, hand tools, and good old-fashioned elbow grease, our mission was to whip the 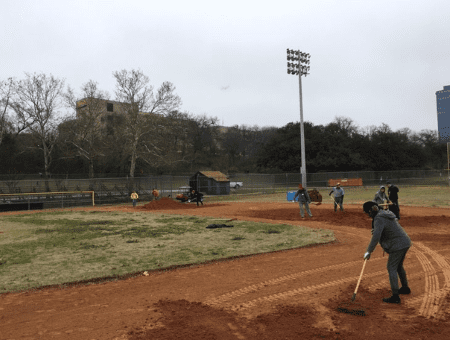 infield, dugouts, and bullpens back into fighting shape. And we did just that.

We didn’t waste any time getting down to business. The event leaders laid out the plan for the day and then we grabbed our tools and hit the field. I must say, for a group of folks who have fairly limited field maintenance experience, we looked like a well-oiled machine. In less than four hours, we had the infield covered with a new dirt surface, cut straight lines in the base paths, laid down fresh sod, painted the dugouts, and made the bullpens operable again. Last but not least, we uprooted the old rotting AstroTurf in the batting cage and avoided getting stuck with rusty nails or used needles while doing so!

Some of the big highlights included the following: 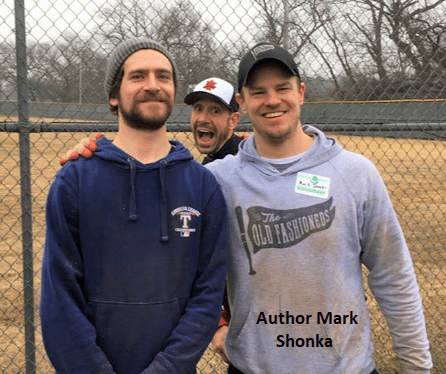 I was proud of the way our league came together. Despite the crappy weather conditions, I didn’t hear a single person complain. We are too in love with this game not to enjoy the simple act of being on a baseball field, much less putting our stamp on it by helping with its renovation. Hell, we plain flat out had fun too. Guys from the Spirits, Bulls, Hurricanes, Brewers, Modoc, Pelicans, and my team, The Old Fashioneds (sorry if I left anyone out) were all joking around with each other, getting some exercise, meeting new league mates and other volunteers, and drinking all the free RC Cola our bladders could hold. Not only were we having fun, but you could feel the excitement emanating from all the players that this signified the beginning of the 2019 season. I believe each one of us will walk on this renovated field standing a little taller this spring, knowing we helped become a small part of its amazing history. If you ask me, I’d say we (run) ruled the event.

Lastly, it would be downright irresponsible of me if I didn’t give a well-deserved shout out to the super-hero caliber leadership of Gerry Mecca and Kirk Pruitt. Not only did they make this ballpark cleanup opportunity possible, but they make our entire league possible. You guys are the heart and soul of the NTABL, and we’d be lost without you. Thanks for leading the way, Skip(s)!

Here is a link to the YouTube video from that special day: https://youtu.be/-Cm8Prik278