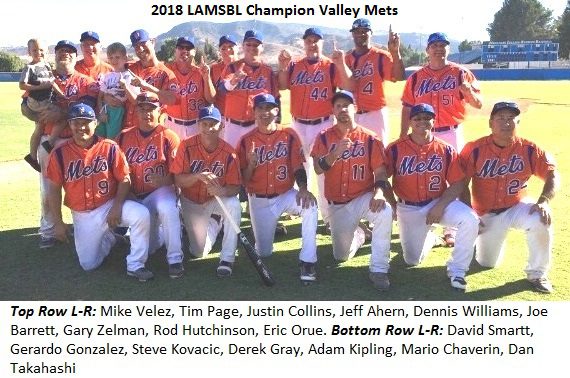 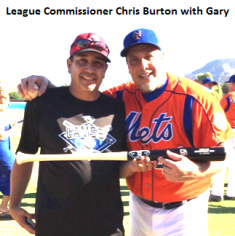 I, Gary Zelman, have been a player in the Los Angeles MSBL since 1993. I created the Valley Mets and have sponsored them since 2000. I love these guys and I think we all actually love each other. The memories etched in our minds and the camaraderie between us keeps us going. I thank Steve Sigler for creating the MSBL, such a positive force for all of us. He set out on a mission to create this forum for us to stay active, have fun, and create memories that will be in our minds for the rest of our lives! Mission accomplished Steve!

Why am I writing about the Valley Mets? Not because we’ve won a lot. It’s because the men on the team are from all walks of life and also because the team has always been classy, whether we won or if we were defeated. That was always the main objective and still remains our focus just about 20 years from our first pitch in 2000. Our Mets Rules: #1) Expect to get a minimum of three at bats per game and six Innings in the field…EVERYBODY PLAYS! Everybody 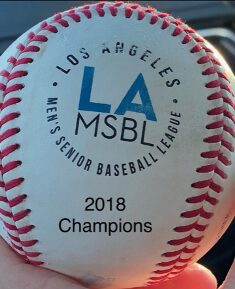 on the team is good enough to play. #2) Play classy. No Hot Dogging. No Taunting. No getting on guys for errors made. No going overboard arguing with calls. You stick to those rules and you’re a Valley Met. You don’t? You won’t be back the following season. We prune the Poison Pills! Let me introduce the cast of characters who have comprised our Valley Mets band of brothers these past 19 years. I need to mention that the Valley Mets continue on and see no stopping in the years to come. The MVP from the 2018 championship season was a rookie, Mike Velez. Hopefully Mike will be an asset to the Mets for many years to come and become a main character for the next chapter. 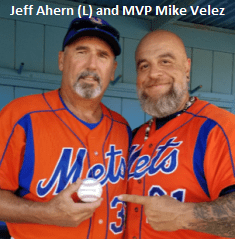 The Los Angeles MSBL started in 1989. We have several players still on our roster from the opening day the league started. Jeff Ahern, Joe Barrett, Tim Page, and Dennis Williams. All four came from completely different baseball histories and still remain teammates on the Valley Mets. These players have been in the MSBL for 30 years and were recently honored by receiving a plaque for their loyalty to the league from MSBL League Founder Steve Sigler.

The Mets have been an amazing group of men. Over 100 players have been on the team during our 19 season history. Through all those players, Joe Barrett, Steve Kovacic, Dan Takahashi, Dennis Williams and myself have been Valley Mets since our first pitch ever.

By now, each one of these players has had some sort of historic moment during the course of their careers. For 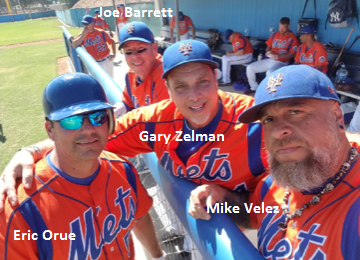 example, Joey Barrett blasted a shot off the wall at Tempe Diablo Stadium off some Randy Johnson flame-throwing ‘Look-a-like’ from Utah. I was fortunate enough to hit a 2-Run walk-off bomb, giving us a 2-1 victory against the tough Long Island Yankees at Papago. Jeff Ahern, who was drafted by the California Angels, was not only the winning pitcher of the NCAA Division 1 Championship for Arizona State in 1980, but has also been inducted into the PCBL and Los Angeles MSBL Halls of Fame. There’s also “The Croation Sensation”, “Dueces” and “The Franchise”, the man so good he has three nicknames, Steve Kovacic, who is a two time League MVP. As a walk-on at ASU in 1990, “Ko” hit a homer his first at bat ever for the Valley Mets and has played quality baseball on both sides of the diamond. 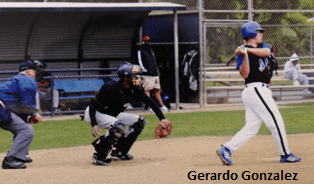 Or maybe former UCLA Bruin starting second baseman Dan Takahashi crushing another LA Yankee pitcher off the wall at Blair College. Perhaps we should talk about our captain Dennis Williams, who caught every pitch of every game this past season! He accomplished this while battling cancer and on chemo at the age of 60 in a 35+ 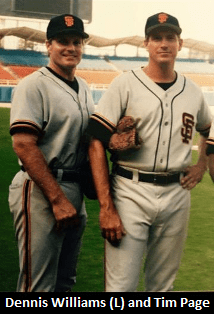 Division! On a side note, in the “Naked Gun 33 1/3” when Leslie Nielsen was dressed as the home plate umpire, it was Dennis that he frisked while he was attempted to catch a popup!…Lol.

We Valley Mets have been blessed by having some of the greatest baseball players you could ever dream of playing with. I can’t mention them all but there’s Tim Page who not only was a standout pitcher for UCLA, he’s also been a triple threat either on the mound at the plate. He has been referred to as one of the best fielding first basemen our league has seen. It’s also Tim who’s on the mound in the movie “The Sandlot,” when the Jett steals home. 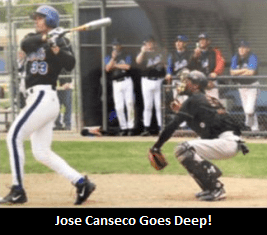 Rod Patterson was another former Oakland A’s Major League player that pitched for us. His slider was simply vicious. Glendon Rusch, who actually got a win against the New York Yankees while pitching for the New York Mets in the 2000 World Series, helped us win a LAMSBL Title in 2012. Pepperdine University standout Gerardo Gonzalez has been our league’s most dominant hitter since 2003. Over his 600 Plate appearances, “G” has struck out less than 20 times. He’s been a 3-time League MVP and a feared bat whenever he comes to the plate.

Glynn Youngblood was known by many who watched him play as the greatest fielder that didn’t make the Major Leagues. Glynn would make plays that we Mets still talk about 20 years later. Kenny Woods was a San Francisco Giants AAA prospect. His athleticism, ability, performance and demeanor have left all that have played with and against him saying he’s just about the best all-round 5-tool player that they’d ever seen. Dan Smith played AAA Ball with the Milwaukee 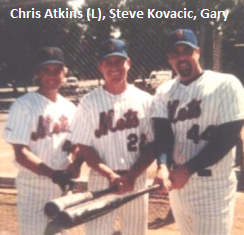 Brewers. His grace at shortstop, coupled with his cannon arm and dynamic stick, helped us win several Championships with him clogging the middle. Derek Gray gave us all he had out in center field until his body just couldn’t continue. A solid stick and a great fielder in spite of his unorthodox method of fielding, Derek is what you call “A Glue Guy,” in the dugout! He’s a true character. He retired last month after giving us all he had in center field for over a dozen seasons.

Then there’s Christopher Atkins! Yeah THAT Christopher Atkins from “The Blue Lagoon” fame. He had 50,000 female followers off the field, but on the field he was a terrific hitter and unbelievably good fielder. Fleet of foot, Chris still holds the Valley Mets record with 16 Straight at bats with a hit! Brody Stevens was Chelsea Handlers sidekick and even Co-starred in the “Hangover” movies, but he also earned several saves pitching for ASU and was a solid 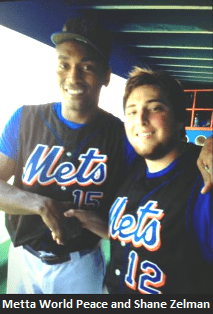 Valley Mets pitcher for a couple of years.

Matt Whisenant earned a World Series ring while pitching for the Florida Marlins but also Helped the Valley Mets win a championship. Adam Chambers is the last player in the LAMSBL to win the Triple Crown when he was named Cy Young, MVP and Batting Champ in 2007. Eric Orue is known throughout the National MSBL Tournament scene as a “Lock Down” pitcher, as well as a dependable standout power hitter. Adam Geery is an incredible player that pitched the deciding game between the L.A. Yankees and us Valley Mets that decided who the “Team of the Decade” was from 2000-2010. The Valley Mets won five times to the L.A. Yankees four, thus winning that honor.

Rod Hutchinson is known as “Hutch in the Clutch” for a reason. No player has been more dependable at the plate than the 6 foot 6 Hutch. He pitches with a Juan Marichal delivery and plays the outfield with the stealth of an American fighter jet. David Smartt is a terrific hitter as well but it’s his play in the outfield, his ability to turn and run to a spot and make the play that separates him from the others in the outfield. Justin Collins played college ball for three different 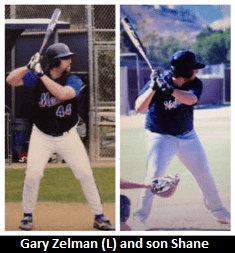 colleges. He has over 125 recreational baseball home runs. He was this year’s Championship game pitcher, securing our 11th LAMSBL Title. Roger Clark was our original pitcher that not only was on the mound when we beat the So Cal Marlins for our first LAMSBL Championship at USC’s Dedeaux Field in 2000, but he was extremely instrumental in helping assemble many of the great players that formed the Valley Mets Team.

Adam Kipling whom we refer to as “The Kippa” has been a 3-Time LAMSBL MVP and batting champion. My son Shane (Zelman) was a teammate with MLB MVP Christian Yelich at Westlake High School, but his favorite memory in baseball was hitting Back-to-Back Bombs with me in this league! Metta World Peace, the NBA legend played on the Valley Mets as well as Dual Pro Sport. Superstar athlete Jarrad Page, who not only played baseball for the San Francisco Giants and football for 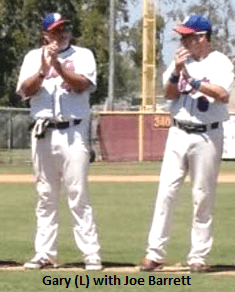 the Kansas City Chiefs, also played baseball for us.

Brandon Murphy was a great pitcher and thunderbolt hitter for the Valley Mets but was forced to retire because of a heart condition. We also have Mike Hammerich, “The Hammer!” Mike is a real character of the game. He is a great pitcher who talks with such a mumble that we rarely knew what he was talking about. But make no mistake. When he started his signature ‘Wind Mill Windup” before he took the mound, we all knew we had the Hammer on the mound and all was well.

Finally there is Tom Ahern, who passed away last season at the age of 91. For almost our entire existence, Jeff’s (pitcher, Ahern) dad Tom came to our games dressed in his uniform and sat on our bench. He never missed a game. Even if Jeff missed a game, “Pops” was there. When Tom passed away he was laid to rest wearing his Valley Mets 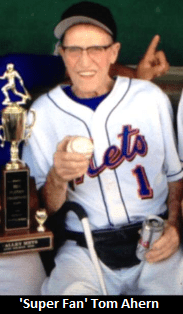 uniform because he loved the team and the guys that much. This past championship season was dedicated to Pops as the Valley Mets earned their 11th LAMSBL Title since 2000 a few weeks ago.

Out of the Valley Mets 19 seasons as a team we’ve gone to the LAMSBL Championship game 17 times, making the playoffs 18 times while winning 11 LAMSBL Championships along the way. We also won the 2007 25+ MSBL Rawlings Cup in Arizona, while our LAMSBL team that season went undefeated going 24-0.