The following article written about Jimmy Rose and the Long Island Black Sox of the Long Island MSBL was published on April 27, 2019 by Jordan Lauterbach, journalist for Newsday newspaper, Long Island’s and New York City’s news source. We are re-printing this article with permission from Newsday. 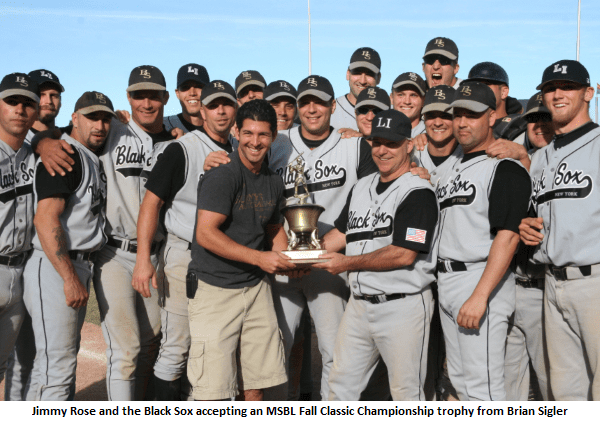 Jimmy Rose plays every position. After all, he has to. Such is life for the 61-year old manager/player/organizer/every-man of the Long Island Black Sox, a men’s club team that features a conglomerate of players of various ages and baseball experience that is sewed together by one thing – their undying devotion to the baseball diamond. Rose, who started the team 34 years ago, didn’t have to worry about a player shortage last week. The Black Sox, who play in men’s leagues around Long Island and Brooklyn as well as various tournaments, pulled together their usual haul of hopefuls and lifers for their annual spring training series with the Long Island Ducks at Bethpage Ballpark in Central Islip. The Ducks play in the Atlantic League, widely considered the best independent league in professional baseball.

Monday’s Black Sox roster featured six players who had spent time with the Ducks in past seasons, including former major-leaguer Reid Gorecki, who played 31 games with the Braves in 2009 and suited up for the Ducks in 2012. Gorecki, who hadn’t played competitively in four years, was convinced by friends to play again.

The series, which featured three games this time around – all Ducks wins — has been played every year since 2010, Ducks president and general manager Michael Pfaff said. This year, the Ducks sent major-league hurlers Tim Melville and John Niese to the hill in the first two games, giving many on the Black Sox a chance to hit against pitchers they’d watched on TV only a few years earlier.

“I know a lot of people go to games and always say they can play with certain guys,” said first baseman Chris Viscuso, 34, of Central Islip. “Most don’t get the chance, but thanks to Jimmy [Rose] and all the things he does, we actually get that opportunity to get hits off Major League Baseball players. It’s a good feeling . . . When you’re playing against Major League Baseball players, you can’t really beat that.” 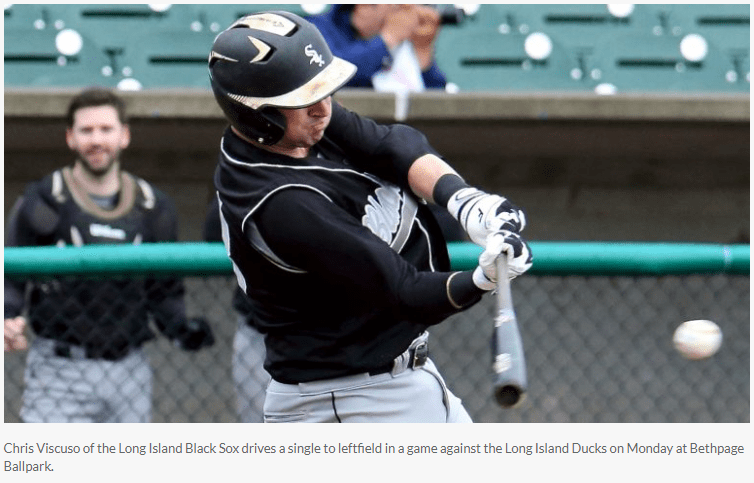 Viscuso, who lives one block away from Bethpage Ballpark, played his college baseball at Adelphi and has been playing with the Black Sox for five years. Despite staring down a major-league pitcher, he wasn’t intimidated. Ever the competitor, Viscuso just wanted to produce.

“You don’t think about it at the time,” Viscuso said. “In the dugout or before the game, your like ‘Oh yeah, he played on this team or that team.’ But, in the box, you’re just trying to get a hit. But, after you do get a hit, it’s good to know that you can do it.”

Viscuso continued: “There’s a lot of people that haven’t played professional baseball or even minor-league baseball that could. It’s good knowing that you could compete against these guys. Only two years ago, [Melville] was in the major leagues. So, it’s not like the guy’s 45 and washed up. He’s still pretty good.”

But, perhaps the best example to the Black Sox’s undeniable fountain of youth came Wednesday, when 57-year old Steven Dennis stepped into the box against former Yankee Brett Marshall. Dennis, who is recovering from a knee injury, made solid contact twice in his second at-bat, fouling a ball past the first-base coaching box before lining out to shallow right field.

“I want to show people that it’s never too late,” said Dennis, of Head of the Harbor. “Never give up. No matter how bad your life is, you fight. All those guys on the Ducks know that, and even the kids on [the Black Sox] know that…It’s a great experience.”

Dennis started playing again two years ago after nearly 15 years away from the game and hasn’t lost his passion for it.

“To be honest with you, batter up,” he said, oozing the enthusiasm of a young draft pick.

Following Wednesday’s game, Ducks pitching coach and former Met Ed Lynch walked up to Dennis. Lynch, 63, who last pitched professionally in 1988, has spent decades working in the upper echelon of the baseball business, including a long stint as Cubs’ general manager from 1994-2000. But even he was amazed by Dennis – a guy who loves the game and sees no reason to stop playing.

“Ed Lynch hugged me and said, ‘Steven, you’re my idol,’” Dennis said with a laugh.