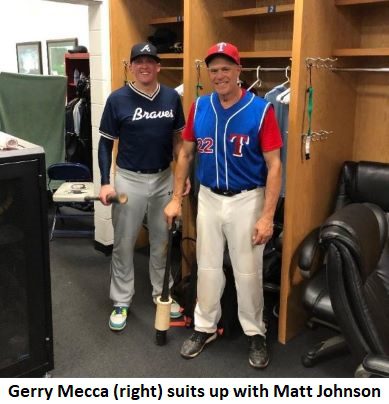 (Photo Credits: Robert Fredette, Fort Worth MSBL) Gerry Mecca has had a long romance with baseball getting his taste of it on a Little League Field in Haddonfield NJ in 1969. But it was his experience on a much larger field, fifty years later, that may be the icing on his baseball cake. Gerry, along with 40 or so other “treated like Major Leaguers” got to be the last to play the last 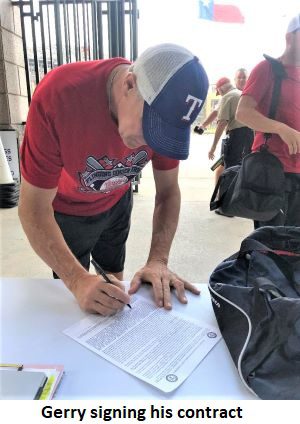 homestand at Globe Life Park before the Rangers move to the new Air-conditioned, Roof-retracting stadium built on the old parking spaces just south of Globe Life Park which is now being modified to feature XFL Football. He and his “All-Star” teammates were followed in their play closely by the Boston Red Sox and the New York Yankees before Home Plate was unearthed and parade marched to the new Globe Life Field. Not bad company!

“My family moved to Texas from Jersey when I was 12 at the same time the Washington Senators moved here and became the Texas Rangers. I am a Phillies fan and saw my first game at the old Arlington Stadium in 1972 ‘cause Richie Allen, one of my Phillies favs, had been traded to the Chicago White Sox and they came to town” but Gerry’s love for the Rangers soon blossomed.

In 1994 he attended the very first game at what was briefly called The Ballpark in Arlington and that same year, a prized attendance at the first and only All-Star Game ever to be played there. A few years later, the ballpark became Ameriquest Field in Arlington. Gerry organized a partnership with the Rangers to get to play two games for some willing philanthropists. “All we had to do was join up with the Rangers and help them fund and build a Habit for Humanity house.” Mecca was all in.Gerry then witnessed several pennants, two disappointing World Series’ and even got to hit a ball out of the park during a vendor sponsored event. So, when Scott Green of Play at the Plate reached out and said he was putting games at the Globe Life Park to “close it down right,” Gerry, now 60, and a host of ballplayers from all over the US and Canada jumped at the chance.

“The Rangers staff treated us like I think real Major Leaguers are treated. Like I’d know” complete with two-day contract, numbered lockers with player names, great meals, access to every amenity and most importantly, playing four games on arguably the best manicured facility anyone not playing pro ball could imagine.

Gerry is a member of the Dallas Orioles of the MSBL DFW area local league the North Texas Amateur Baseball League. He is in IT practitioner and is actively involved in his leagues Foundation (NTABF) which has raised nearly $200,000 for Scottish Rite Hospital. He is supported in his baseball life by his wife Michele and two kids, daughter Ryan and son Vincent.

Something tells me he just might get a crack at the new Globe Life Field…anyone betting against him? 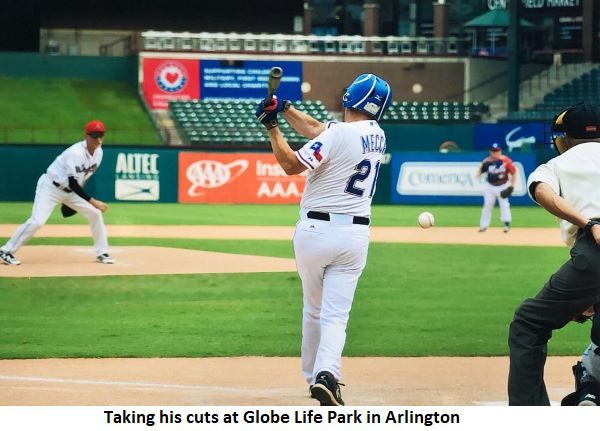