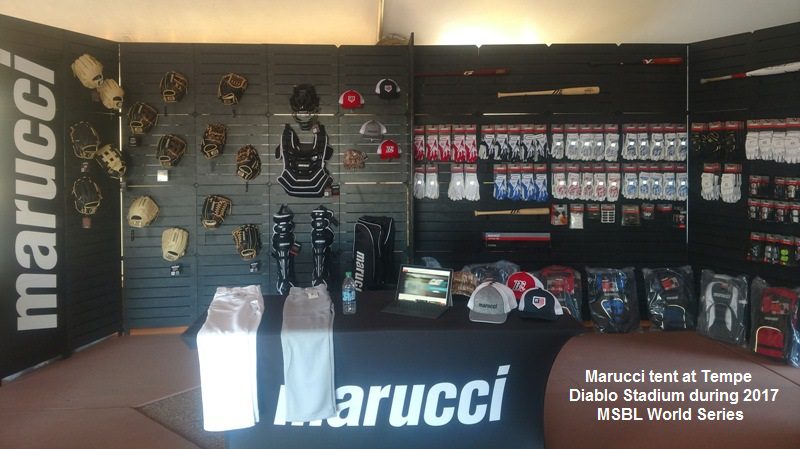 Marucci is the official bat of the MSBL. Why? Ask John Tompkins, Director of the Marucci Mobile Tour which makes a three week stop in Arizona as part of the MSBL World Series. He is in charge of what goes on in and around the ‘Marucci Tent’ at Tempe Diablo Stadium during this year’s World Series. Marucci will once again be the exclusive bat representative and will be located on the main concourse patio of the stadium. 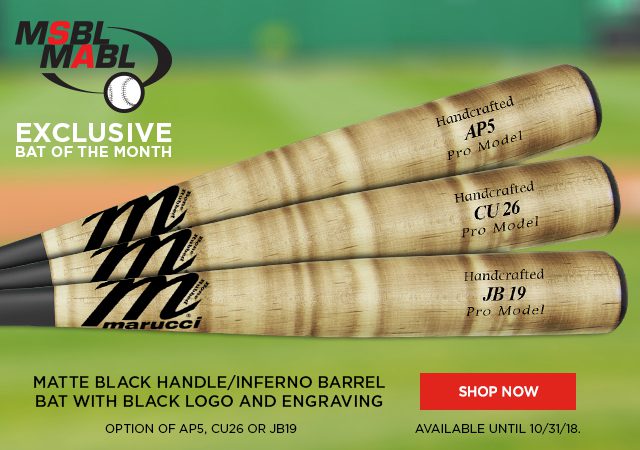 “Right now over 50% of all big league bats are Marucci,” explained Tompkins. “This also includes Victus, another quality bat company that we recently acquired to further strengthen our standing with the professional or amateur player. Our bats are game-ready for the pros before they leave the building.

We may have an order from a player for 24 bats but if only six are perfect, then six is all they get and we’ll send the rest when they are deemed perfect. It is always quality first and not the numbers. We have never offered players money to use our bats, like some companies. We let the quality of the wood do the talking. We’d like to think that is why we are the leader.”

How is the alliance with MSBL working out so far? “We were presented with an opportunity to be associated with this wonderful organization and jumped at it. It has been a fantastic agreement with one of the greatest baseball organizations that maintains the values of keeping the game competitive and giving their members an opportunity to compete, regardless of age or skill level. It mirrors our philosophy, which is what makes it such a great partnership.”

Marucci has been involved at the MSBL World Series for the past three years, with 2017 being the first as an 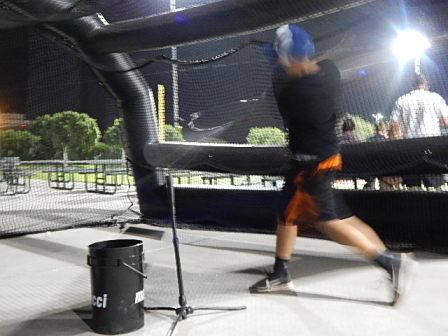 exclusive bat company. One visit to the Marucci tent also shows you that they are much more than just a barrel of bats for you to purchase. They have uniforms, belts, batting gloves, fielder’s gloves, pine tar, apparel and all sorts of baseball accessories. They even sport a batting cage to try out the products. Last year was a learning experience as they listened to what the players wanted. This year there are some exciting changes in store.

“We will be offering expanded batting cages right there at the stadium for the players to take some ‘live’ cuts before their games and we have also expanded the size of the cages for multiple use,” Tompkins told us. “We will have a couple of hitting nets alongside so you can take a few cuts off a tee or maybe soft toss. We are not just there to sell product. We are all about the game and we want to make sure the players have a complete baseball experience if they wish.” 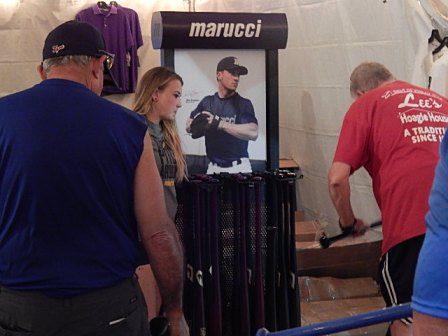 Marucci is also taking part in presenting awards and also offering some premiums for the MSBL crowd. “This year we are giving away some premium batting gloves to every player who registered. We also have water bottles and some wet towels to wrap around your neck to help compete with the heat. We’re there to be a total MSBL representative for each player.”

There is an award that is quite unique and exclusively Marucci’s brain child and something that should be a lot of fun. “We will be giving out an award called the ‘Beast of the Week’, said Tompkins. “Every player will be able to nominate someone who exemplifies hustle, courage and performance. This isn’t just given to the guy who is hitting .800 but maybe someone who is the first one running out of the dugout and the first one running back in. It’s for passion and the thrill of the game.”

How does this award work? “We don’t solely take the word of someone who nominates a person at our tent. We 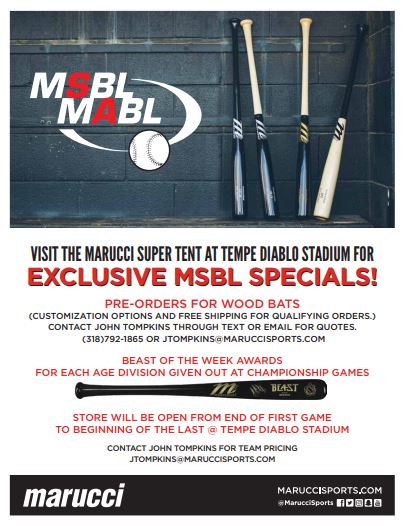 want to see the player and scout them. We will have plenty of staff in Arizona so we’re hitting the fields to check them out. Just come to the tent and tell us about someone and we’ll go take a look. This is a legitimate award and not a just a popularity contest. You don’t have to be the best player on the team to be considered.”

There will be three ‘welcome’ barbecues this year being held right next to the Marucci tent on the Tempe Diablo concourse patio. They will take place the first two Thursdays of the three week tourney, October 18th and 25th, from 4:30 to 8:30 and then the same time on Sunday, October 29th. Make your plans to attend, as Marucci will be raffling off a dozen bats at each event!

“We will be there whenever there is a game at the stadium and of course during the barbecues and trade show. We are open from the end of the first game to the beginning of the last game, which is usually a 12 hour day. Be sure to stop by and see what we’re up to.”