This was our 8th annual Father Son tournament. We had 12 teams this year and had to turn away another one who entered too late. The tournament is growing and it is only fitting seeing how Sacramento is our tournament site as well as the home town of Val Lewis, the originator of the Father/Son format. This was his idea and who knew what this would become.

Our charity this year was Blue Star Moms, proud mothers who have children serving in the armed forces. They send care packages to those sons and daughters serving our nation. Teena VanNess did an awesome job leading the event and was able to secure a large number of donations and prizes for the raffle. She also serves on the Blue Stars Moms board. We raised $2,000 this year, as Sacramento league president Alan VanNess utilized his sales skills and pushed hard asking for donations.

Stated Van Ness, “Having our own Father’s Day tournament with the Father/Son format in Sacramento was long standing member Jim Tygrett-DeNuzzi’s idea. So after conversations with tournament director Jeff Gardenhire we agreed that from this point forward the MVP award will be known as the Jim Tygrett award.”

In light of the newly installed Jim Tygrett MVP award, here are this year’s recipients:

We created a new Sacramento division for new teams with less talent. Then we split up the Nor Cal Division after pool play and seeded them either in Nor Cal D1 orNor Cal D2 so that they may qualify for their own Championship game. Below are the final results:

“The Cardinals captured their third consecutive local championship. Although the score looks lopsided the Cardinals had to add insurance runs late to pull away permanently and win the game. TABU made a push in the eighth to make it interesting. Down 15-6 at the time they put up a five spot with a grand slam to pull within four runs. The Cardinals however would not be denied and put up another seven runs to answer and secure their third consecutive championship. This is now our 15th year of playing Father /Son baseball. It is by far the best and most enjoyable baseball that this lifelong baseball junkie has ever been a part of. Many of the players on our team have been doing this for many years and we are definitely one of the more veteran teams you will find.” 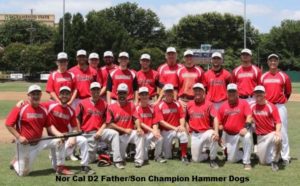 This was the first appearance to the Championship for both teams. What makes this special though is the Crump story. The Hammer Dogs are made up of mostly the Crump family. Many of the Crump fathers were on the very first Father Son World Series Championship team, Nor Cal West. A trip to his first father-son tournament, the 2001 Arizona World Series, sparked a dream in Mark Crump to field a team filled with his baseball loving family. Playing with five other family members and being cheered on by his eleven-year-old daughter Allie, Mark’s Elk Grove Tribe team took a large lead in to the last inning of the championship game only to see victory melt away to a very strong Sacramento Cardinals team. Having the opportunity to play with even more of his family would have to wait as his three children, Allie, Tori, and Michael as well as most of his brother’s and cousin’s kids, were not yet old enough to play or were committed to their High School or College teams at tournament time. (There will be more about the special Crump family bond in a separate story on the MSBL website soon.) 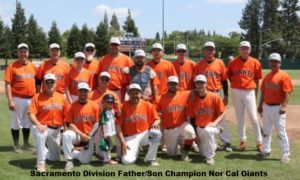 This was the Nor Cal Giants first Sacramento Father Son tournament appearance, playing in the newly formed Sacramento division.

The Nor Cal Giants were led by manger Vic Wooten. The Giants cruised through round robin play, going 3-0 and securing the number one seed for the Sacramento Championship. The Roosters lost to the Giants in pool play in a close game but gave them a fight in the Championship. They just didn’t have the fire power to finish it out. Eben Areola took home MVP honors for the Giants coming up big throughout the tournament including a huge double in the championship game that knocked in three runs and secured the victory. Vic said that playing in Sacramento on our home turf was a treat and more importantly debuting a daughter while playing alongside our children was a very special experience.