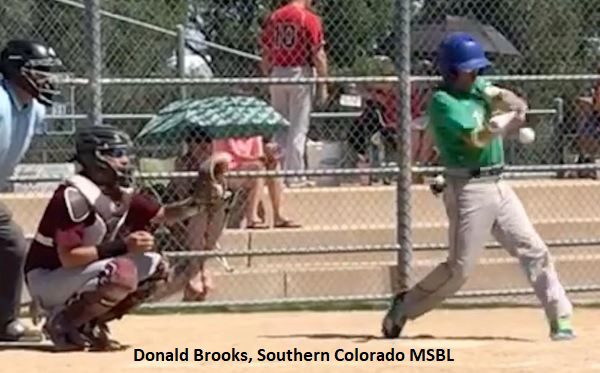 A good heart-warming story has unfolded this season in the Southern Colorado MSBL in Colorado Springs. The 10-5 Colorado Springs Zephyrs recently picked up a player at the last minute via the player pool on the league website. The player has been active in various adult baseball leagues throughout Southern New Jersey since 2000. This player played and managed over 13 years in South Jersey. After the 2013 season, he decided to make a professional career change and moved to Montana. After taking a job as a Flight Paramedic in Montana, late in 2014 he was diagnosed with Multiple Sclerosis. At that point he felt his athletic career had ended. Fast forward to 2019, now in southern Colorado, still working as a Flight Paramedic and going to school full-time to get a master’s degree, he felt the itch to play again. He placed his name on the player pool list and was picked up.

Donald Brooks, who recently celebrated a birthday, has become one of the highlights of the season in Colorado Springs. Playing in the 50+ classics division, heading into the final week of the regular season Brooks has been an integral part of the Zephyrs contending for first place. Brooks has played various positions throughout the season, but has been steadfast at second base and now third base. At the plate Brooks has been on a high all season, batting .592 and showing exciting base running throughout the season. For someone who periodically deals with numbness in his legs, balance issues and loss of sensation in his right hand and fingertips, he gives his all week in and week out while continuing to play at a level that surpasses any deficits from his disease.

Brooks is both quiet and humble about his play, going out each week just to have fun. Brooks is always smiling and laughing with all players on the field and the umpires. Brooks came back from a

stress fracture early in the season to play in the July 4th weekend Pikes Peak Classic in Colorado Springs. From there he returned to the Zephyrs and has quietly batted .800 since his return. Brooks does all the little things that go unnoticed in the game.

Brooks is a refreshing addition to the league. I have played against him and with him this season. Brooks is a true ball player at heart and has shown that heart is bigger than his stature. It is a pleasure to have seen this ball player become part of our league. God willing, Brooks will be a part of our league for years to come. The Zephyrs found a diamond in the rough. Brooks is one player who is a gentleman and a gamer.