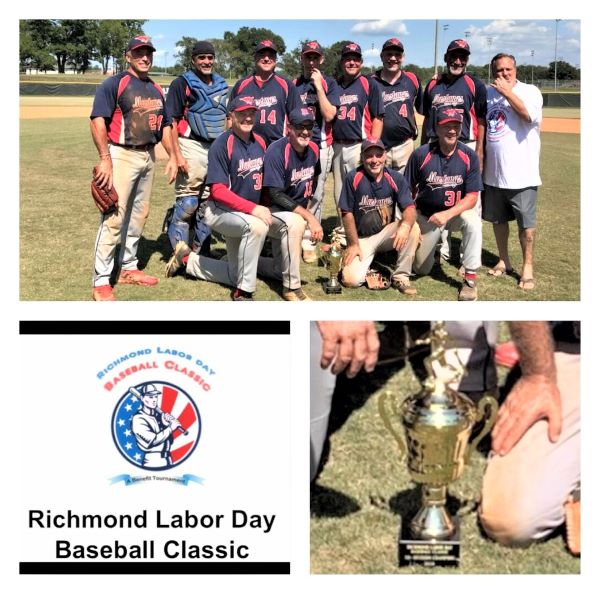 In the first year of the 53+ age division, the Diamond Dream Mustangs, out of the DCMSBL, went 5-0 to win the Charlottesville MSBL Labor Day Classic in Richmond. With a roster of only 13 players, the win was a total team effort behind strong pitching from Kai Schlang, Alex Krupenchenkov and Mike April, plus superb hitting from Jimmy O’Connor, Willie Jutze and Robert Doggett, who all had .500+ on-base percentages. Mike McConnell, Steve Hutchinson and Dan Cassidy were also strong at the plate.

On the field, Ron Lochner, Tim Lysik, Don Dawson and Ron Bittner were resilient defensive contributors. Player-Manager Ray Moon pitched eight solid innings in the championship game to capture the title, on the hottest afternoon of the tournament. The win marks two years in a row the Mustangs took home the Classic trophy after winning the 45-age division last year.

Diamond Dream Mustangs General Manager Mike LaComb stated, “The Labor Day Classic is a very well-run tournament and the Mustangs look forward to coming back next year and competing for another title. We have an extra level of support for this charity tournament, as it benefits the Mitchell Hash Foundation, which helps to prevent suicide among returning veterans and first responders.”