The story below was written by Puget Sound Senior Baseball League president Tom Evans Krause and posted on the Puget Sound website for all to read. We obtained permission from Tom to reprint this article about long-time league member Dave Reynolds, who faced some serious health issues in 2018, lost 55 pounds from his 6′ 5″, 230 pound frame yet at the age of 68 vowed to make it all the way back and play again. This story is Dave’s ‘Baseball Miracle’ as written by Tom Evans Krause. 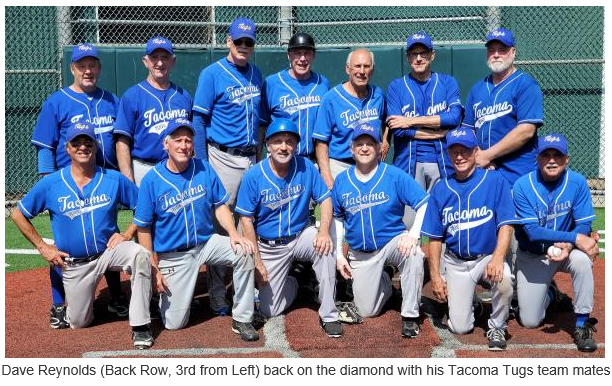 This is a story of love, faith, determination and, yes, add in a bit of miracle power. Pitcher/First Baseman Dave Reynolds has played in the MSBL-affiliate Puget Sound Senior Baseball League for fourteen seasons. He’s been a mainstay for the Tacoma Tugs, who have competed in several different PSSBL age brackets over the years. Dave has also played for the 3n2 Rangers for a number of seasons in other PSSBL divisions.

A 5-time divisional champion who has also won multiple national championship rings, Dave Reynolds has more than 140 career wins while sporting a .360+ batting average. He was inducted into the Puget Sound Senior Baseball League Hall of Fame in June, 2018.

Just four months later Reynolds experienced what he initially thought was a reaction to a flu shot. In reality, he had experienced a gall-stone attack on his pancreas which led to pancreatitis. 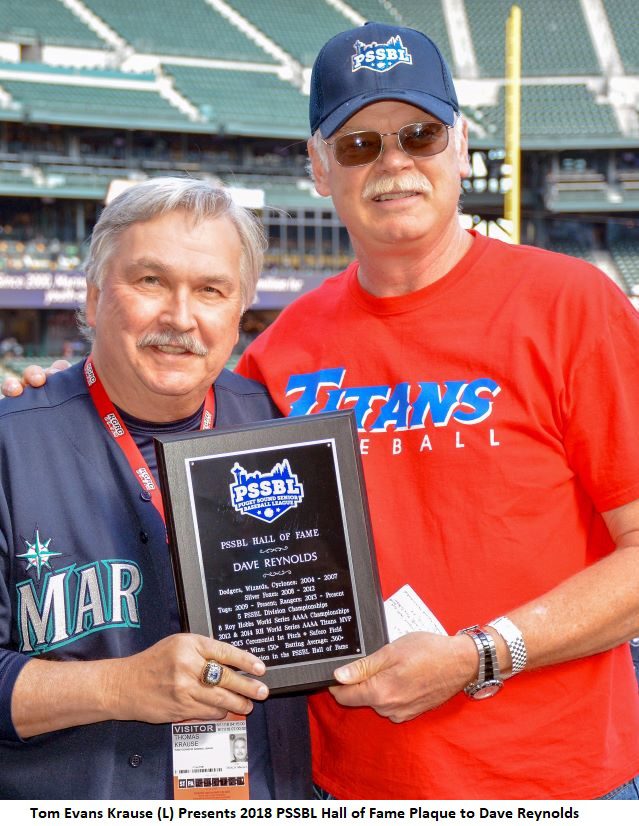 He developed pseudo cysts which grew from walnut to grapefruit size….and got infected. This led to “walled-off” pancreatic necrosis—his blocked pancreatic enzymes had eaten two-thirds of his pancreas which, unfortunately does not regenerate itself. Nearly two liters of fluid—the remains of what was once two-thirds of his pancreas—was removed the day after Christmas and a tube was inserted to drain the remaining “necrotic debris” for nearly 3 months.

Throughout this health crisis Reynolds had to flush the tube 3 times a day and could not stand or walk without having light-headedness, dizziness and shortness of breath. He was wheelchair-bound and couldn’t exert himself in any way.

After doctors were able to save one-third of Dave’s pancreas, his appetite returned and he was able to eat 3500-4000 calories a day for a week in early February, 2019. Despite the high calorie intake, he still lost 10 more pounds for a total of 55 pounds dropped since October. Doctors instituted new treatments to help him overcome pancreatic enzyme insufficiency and on March 13, 2019 he awoke after the best sleep he’d had in 5 months and all symptoms appeared to be gone.

Dave Reynolds was cleared to start working out a week later assisted by team mates and a sports therapist. It was the answer to many prayers. Reynolds’ wife, Helena, who was by his side (or behind pushing his wheelchair) for the entire ordeal, wrote to family, friends, team mates and players throughout the league that “it would take a miracle for Dave to get back on the field this season.” 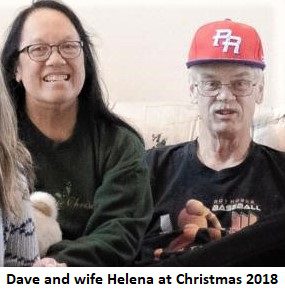 The 68-year old Reynolds’ began an arduous training regimen guided by a sports therapist and assisted by Tugs team mates. Over the next four months he gained back 30 pounds of muscle mass with an eye toward rejoining his teams for the remainder of the 2019 campaign.

The love for baseball can be an incredibly strong motivator and Miracles Do Happen!

Reynolds rejoined the Tacoma Tugs for his 15th PSSBL season on Sunday, July 14th, taking the mound as the starting pitcher against the rival defending champion Rainier Division (60 & over) Mariners. He threw three strong innings facing 16 batters while only giving up two runs – one of which was unearned. In his first at bat Dave singled and scored while the Tugs built a 9-2 lead. Despite a furious comeback by the Mariners against his bullpen, Reynolds and the Tugs persevered 9-7.

The next night, July 15th, Dave pitched 48 more pitches in 4 stellar innings, went 2 for 3 with a walk and left the game with a 3-2 lead. Although the Tugs didn’t win that game, Dave is winning his health back.