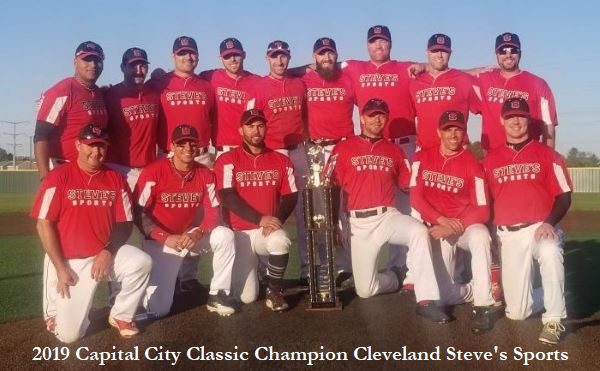 Cleveland Steve’s Sports won the 2019 Capital City Classic (Oct 12-13). The Pool play began on Saturday where Cleveland went 2-0. The day started out with a 9-5 win over South Oakland (PA). The bats woke up for game two beating Indianapolis (IN) by a score of 21-0.

The semi Finals Sunday saw a rematch between Cleveland and South Oakland. Cleveland led most of the way, but a late rally found Cleveland entering the bottom of the ninth trailing 8-6. A two out walk-off double by Adam Gray gave Cleveland the 9-8 win.

The Championship game got out of hand fairly quickly as Cleveland jumped out to an early 10-1 lead after two innings. Eventually the run rule was enforced as Cleveland beat the Columbus Pirates by a score of 15-5. Kyle Stahlberg got the win on the mound going the distance. Steve Ross led the way going 3-3 with three RBI. Steve Ross was awarded MVP for the tourney with an incredible 12-15, one home run, three triples, two doubles and 10 RBI for the weekend.

Next up for Cleveland Steve’s Sports is a trip back to the MSBL Fall Classic in West Palm Beach, FL in November.