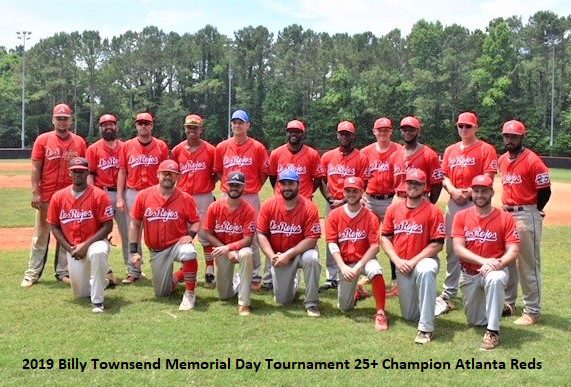 In the 25th Annual Atlanta Memorial Day Tournament, and the 22nd named in honor of Billy Townsend, the Atlanta Reds captured their fourth championship in 17 appearances by winning the 25-over division. In those 17 appearances the Reds have a record of 56-15-1.

The Reds defeated a very tough Orlando Madness team 8-4 for the title, after tying the Madness the night before 5-5. Tourney MVP Jamie Sexton threw 16.2 innings, winning both games he started, while striking out 11 and compiling an 0.33 ERA. The Reds Zach Moon, J.D. Shields, Justin Johnson, Tyler Massey and Rocco Callaway all homered during tourney.