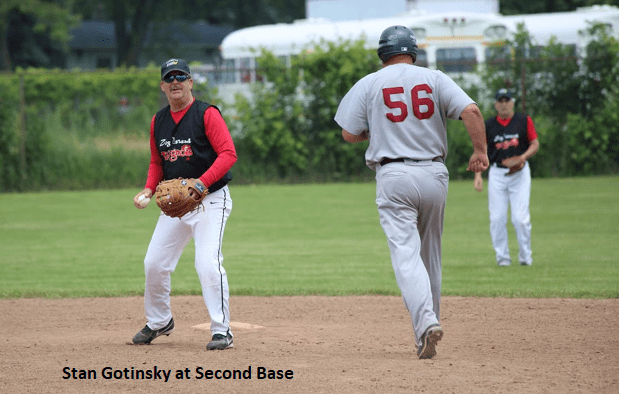 By Larry Paladino, Teammate and Friend

(Reprinted from October 2018 after Stan Gotinsky died tragically of a heart attack) With fear and hate seeming to multiply around the world faster than understanding and love can counter them, people like Stanley Carmen Gotinsky have a way of just plowing forward, head down, by doing what is appropriate for the moment and thus accomplishing all goals that might otherwise seem too formidable.

With a humor grounded in candor, Stan Gotinsky was able to conquer challenges lesser souls might simply ignore, or skirt. He, though, seemed to have no qualms when tackling his job at Chrysler Corporation (now FCA) or activities outside his occupation, especially baseball. That’s baseball, not softball. Who plays hardball at 71? Stan did, and managed his 55+ and 65+ Zug Island Lugnuts teams in the Detroit MSBL to boot.

Stan knew what it takes to win. The Lugnuts rarely won. But he had an inherent ability to suffer from within in order to keep his team of not-so-adept ballplayers functioning competitively in the game they love. Many of their skills left them a generation ago, but their manager had a way of understanding that reality and holding everyone together against odds that pitted them against teams with a win-at-all-costs approach.

Playing senior baseball for two decades shows grit in itself. But doing so at the same time as raising a family and holding down a stress-filled job on the back end of a half-century of corporate ups and downs speaks to the man’s character. And as for that, just ask those who worked with him, and those who competed on his teams, what a down-to-earth and yet up-to-all-tasks leader he was.

When he died suddenly of a heart attack on October 25, 2018, at his home in Troy, Michigan it not only came as a gut-wrenching shock to his wife, Christine, and daughters Samantha and Hannah, but drew reactions of incredulity from his teammates and co-workers. And even from his dogs if they could express themselves.

No, it didn’t happen. It couldn’t happen to Stan. He was young by his players’ perspective and still not ready to retire from his job as an internet technology manager. He needed to find a catcher

for his 2019 65+ team and get his first-baseman’s mitt broken in a bit more. He also wanted to perhaps work some of those kinks out that slowed his running down some. He was able to get help collecting fees on the 55+ team, now maybe he could get someone to do that for the 65’s for the next season and he could concentrate more on batting orders and defensive lineups.

Metropolitan Detroit grew into the motor capital of the world with guys like Stan, who migrated from West Virginia. He was born there July 16, 1947, in Douglas to the late Stanley and Comalee Gotinsky. He always enjoyed keeping in touch with family and going back for reunions. He loved to spend time with his children, grandchildren, great-grandchildren, siblings and friends. Great-grandchildren? Who’d believe it while watching him play baseball, or racquetball, or golf? He took them on ski trips and created wonderful memories of all of them together.

His widow, Christine, was married to him for 25 years. She, Samantha, and adopted daughter Hannah were regulars at his games. Stan’s teammates probably had no idea of the depth of his life before the Lugnuts, as can be surmised from those others who survive him. He was the loving father, also, of Tammy Bensinger (Mike), Wendy Machuta (Dan), Trisha Felsner (Mike) and Brad Gotinsky. His grandchildren are Brittney Machuta, Shelby Bensinger, Zach Bensinger, Sydney Machuta, Lexie Felsner, Allie Felsner and Drake Felsner. His grandchildren are Jaxon and Lilly Jeroue. He also is survived by his brother Frank (Lena), plus sisters Brenda Gotinsky and Sandy Weakland (Jim), plus many nieces, nephews, cousins, and numerous loved ones.

‘To an Athlete Dying Young’

Today the road all runners come,

Shoulder-high we bring you home,

And set you at your threshold down,

Townsman of a stiller town.

In his famous poem, Housman, according to “Masterpieces of the World,” “advances the idea that it is far better to die in one’s prime, while one can be remembered for his or her youthful accomplishments, than to become infirm, forgotten, ignored, or replaced in the memories and hearts of one’s townspeople.”

He wasn’t a 25-year-old athlete, but he was still an athlete and at 71 seemed still to be in his prime. And he’s not going to be forgotten. Take care, Stan. Take two pitches and hit to right.