June 27, 2018–Joshua Stevens has excelled at baseball from a young age, despite having what some would call a setback — he was born without a full left arm.

But recently the pitcher — in addition to completing his first year playing for Huntingdon College in Montgomery — was able to be a part of a brand-new team formed by Louisville Slugger (LS).

The team, called the LS Warriors, brought together 15 athletes who are all either U.S. military veterans, active duty personnel, Wounded Warriors, or current or former college baseball players. 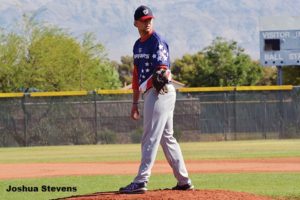 Joshua Stevens, who was born without a full left arm, is part of a team called the LS Warriors. The team consists of 15 athletes who have either suffered a loss of limb or limb deformity.

All of them like Stevens have either suffered a loss of limb or limb deformity. Some of the athletes play with prostheses, some don’t. One player, Lucas Mayer, has an ocular prosthesis.

“We’ve all become more of a family,” said Stevens, a member of Shades Mountain Baptist Church, Vestavia Hills. “We can be ourselves because some people who aren’t disabled don’t understand what we go through.”

They lost their next two games, missing the playoffs by only one run.

“It was not a quick and simple process to find a team of extremely athletic and skilled amputee ball players,” said David Van Sleet, the team’s general manager. “But through a national tryout and after extensive research and collaboration with various references and prosthetic vendors, this team now consists of 15 players, 11 with college baseball experience.”

The major league Washington Nationals committed its support to the team by giving the LS Warriors the Nationals’ official game hat to wear during the tournament. Several former major league players also had roles on the team’s coaching staff.

The team’s next tournament is the MSBL/MABL World Series in Arizona in October.