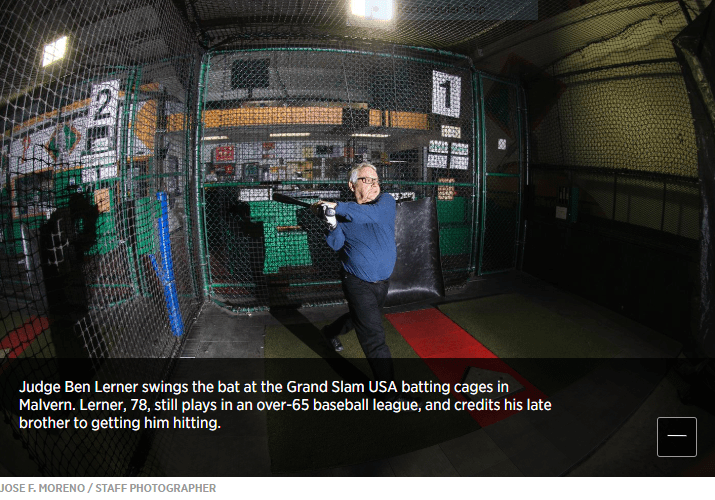 Judge Ben Lerner resides in Philadelphia and plays in the John A. DeBenedictis Baseball League managed by league president Pat Fynes, an MSBL affiliate encompassing the Wilmington, Delaware, South Jersey and Suburban Philadelphia areas. This 78-year old baseball aficionado continues to trade in his robes for a uniform every week while playing for the Plymouth Braves in the 65-over division and owes his appreciation and skills of the game to his brother Alan, who passed away in 2010. 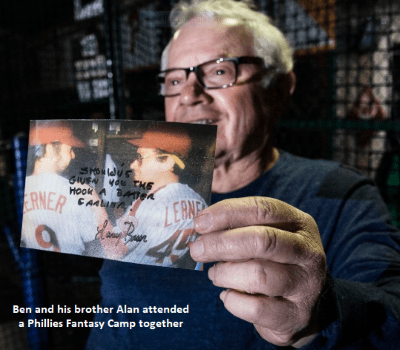 “Alan got me started about a dozen years ago with the 55+ Diamondbacks in what was then called the Tri-State League,” explained Ben. “When enough of us properly aged I “graduated” with many of my teammates to the new 65+ division, playing with the Plymouth Braves, with whom I still play. I am an off the bench first baseman and outfielder when I play the field—adequate at best.”

Ben is also an MSBL World Series participant, playing for MSBL managerial legend and 2016 MSBL Man of the Year Donny DeCordova and his Tri-Valley Giants.

“About five years ago I went to Arizona to play on one of Donny’s Giants teams in the World Series and I have gone every year since, moving up from the 70+ to the 73+ division. I play the outfield down there and do my best not to get hit in the head with a fly ball! I hope to still be ambulatory when there is hopefully an 80+ division.

I am probably one of the least gifted players on my team, but nobody loves the game more than I do. After my family and my judicial career, baseball is my greatest passion and my greatest joy. My brother Alan, John DeBenedictis, Pat Fynes, my Braves teammates and MSBL have given me the gift of playing the game, and I am beyond grateful to all of them.”

On March 14th Philadelphia Enquirer journalist Mike Newall posted an article about Pat, his association with the John A. DeBenedictis Baseball League and more importantly his baseball journey with his brother Alan. Ben was kind enough to notify us about the article and Mike Newall and the Enquirer authorized our reprint. You can read the story by clicking on the highlighted ‘Philadelphia Enquirer’ above. You can also visit the paper’s website at www.phillynews.com.