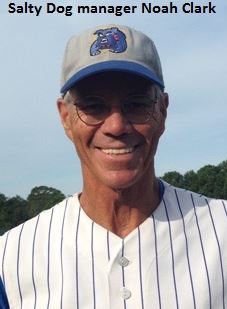 Rhode Island is famous for clam chowder, George M. Cohan and for not being too awfully big. But the one fact they can be most proud of is having Noah Clark as a resident, born and raised in this magical state. Noah Clark is a tremendously successful fishing entrepreneur and also an MSBL veteran whos infectious smile has been seen on Rhode Island ball fields and Arizona and Florida stadiums since 1989.

“I pitched in high school but blew my arm out,” said the 70-year old Clark. “I switched to first base but that called off any scouts or a chance for a scholarship so I worked my way through school cutting up fish seven days a week. I guess I made the right career decision!”

Fast forward to 1989 and the baseball itch needed to be scratched. He noticed that the Rhode Island MSBL was forming and a friend encouraged him to get back in the game. That’s an understatement, as Noah dove in as a player/manager. That’s where the Rhode Island Salts were formed in the 30-over division, along with one of Noah’s other teams, the Mariners. “After our first 12 years the Salts won ten championships but were getting a little older so that’s where the Salty Dogs were born, as a need to move into the 40-over division. We needed a new identity.” 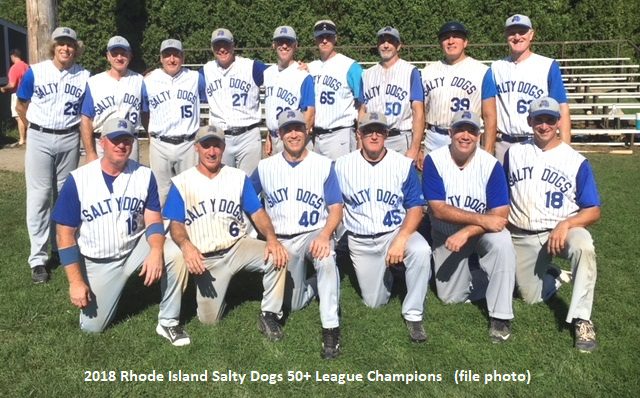 “Thanks to Noah for his unwavering support on a local and National level,” said Steve Sigler. “He has and continues to be instrumental with the Rhode Island Men’s Senior Baseball League’s success. He is one of the easiest MSBL team managers to deal with and is professional, in every way. A very well-deserved honor!”

The Salty Dogs are an iconic bunch both is their league and at national MSBL tournaments, with their royal blue sleeveless pinstripes roaming the fields. They have been a success, always in the 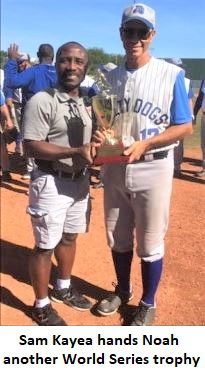 thick of the battle, wherever they go. Now playing in both the Rhode Island MSBL 40-over and 50-over divisions, the Dogs have been more than dominant. “We have won nine championships in a row in the 40’s and eight in the 50’s. I’m very proud of the guys. We don’t allow any bickering or taunting the other team and we’ve been together a long time. I love their attitude and it shows in the results. In 2019 our 50’s went 23-1. That’s pretty good.”

Fly west 2,600 miles and you come to the site of the MSBL World Series in Arizona, where the Dogs are also waiting for opponents to tackle. The Salty Dogs have equal success in Arizona and at the MSBL Fall Classic in Florida, where they head every year immediately following the big show in Arizona. “This year we’re playing in the 60’s and the 65’s at the World Series. We were asked to move up to the National division last year in the 60’s, to sort of round out the field. We ended up winning it and beating some really good teams. I am very proud of that and it is one of my fondest memories of the World Series,” explained a happy Clark. “I have a feeling this year we’ll have a bullseye on our backs.”

Noah’s trek to the top of the heap wasn’t accomplished alone. Always a man behind the scenes and not one to draw attention to himself, Noah is quick to mention those who have been the most impactful is his baseball life. “David Saad began the MSBL affiliate in Rhode Island and worked hard to keep things together until his recent retirement. He provided a place to play. I helped him behind the scenes, usually in the area of securing quality fields. But without his passion, the league wouldn’t be there today. He was a tremendous influence, both on and off the field.”

There are a couple of other individuals whom Noah is quick to recognize. “Not everybody knows Al Alvarez. He is a Rhode Island native who has coached me in baseball and unfortunately passed away this year. He instilled in me that if you work hard, good things will happen. I brought him to Arizona every year to keep our book and keep everybody on their toes. Our success is in large part because of Al and his leadership. I’ll never forget him.”

“Steve Sigler tops the list because he had the vision of MSBL,” continued Noah. “I am very humbled by this honor. I’m just a little guy from a little state and there are many others more worthy of this honor and to be recognized is really special. Thank you, Steve.”

The Salty Dogs have around 20 rings from the combination of the World Series and Fall Classic, including one from Puerto Rico, but there must be one moment that sticks out from all of the experiences. Well, it turned out that it was an easy answer.

“In 2005 we snuck into the playoffs at 3-3 and played Friday in the playoffs,” started Noah as he weaved down memory lane. “Somehow we had to play three games that day and as it turned out we played all three teams who had beaten us in the round-robin. After a triple header we ended up beating them all in our ‘revenge tour’ and then relaxed and exploded the next day and won the championship at Papago and somehow saved our best game for last. After a week of play and then three games on Friday I wasn’t sure what team we would bring to Saturday but we saved the best for last. That was magical and is number one on the Salty Dog hit parade.”