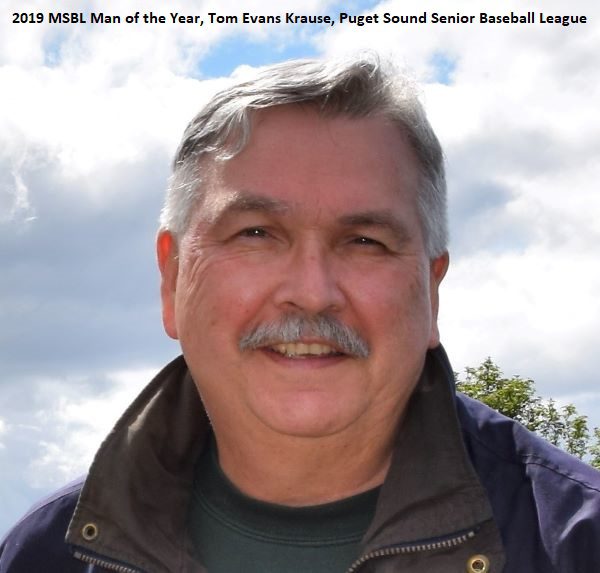 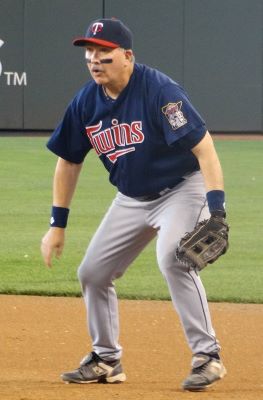 Tom Evans Krause grew up in the Twin Cities and attended his first professional baseball game in 1961, the Minnesota Twins inaugural year. His parents took him to see the vaunted New York Yankees play the home nine at the old Metropolitan Stadium. Dad taught him the game and Tom fell in love with baseball. His Twins hero was Harmon Killebrew and Krause says “I have been wearing #3 since high school in honor of Harmon.” Tom has a long history of wearing many hats in the radio broadcasting industry while working across the country, as his travels eventually landed him in Seattle back in 1990. That was great news for the Puget Sound Senior Baseball League.

“After reading Steve Sigler’s Sports Illustrated article, I wanted to dust off the spikes and get back into the game,” said Krause. “I joined the league in

Tom’s impact and passion is undeniable, as he has helped make the PSSBL one of the premier leagues in the MSBL family. He was inducted into the MSBL Hall of Fame in 2012, received the 2016 MSBL Lifetime Achievement Award and is part of the MSBL Honor Roll contingent. For Tom’s leadership abilities and love of the game, MSBL Founder and President Steve Sigler has named Tom as the 2019 MSBL Man of the Year.

“The MSBL Man of the Year is such a distinct honor and Tom’s predecessors are MSBL trailblazers, as he is,” stated Sigler. “It is a really smart, distinctive group and I will look forward to making this presentation in Arizona.”

Tom is also quite active at the MSBL World Series in Arizona every year, both as player and manager, while sending multiple teams to the tourney 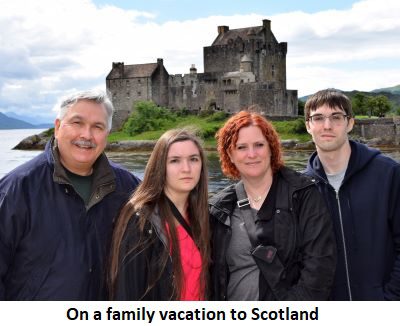 every year from the PSSBL. He has been managing the Puget Sound Twins for 15 years – now in the 45+ Cactus Division. “I remember our first World Series championship back in 2007 as the Puget Sound Gators. My late Father in Law was a ballplayer and MLB associate scout. He was such a huge influence on me that when all of the players ran to the center of the field to celebrate, I stayed on the bench thinking about him and the incredibly special moment. My dad, Don Krause, was so proud he took a picture of my championship ring and showed it off to all his associates for many years. The MSBL World Series has enabled me to make countless friends and carve amazing memories.” 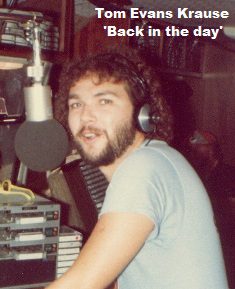 In the league back home in Seattle Tom remains a part of the Crawfords in the 35-over Teton division, the Mariners of the 50-over Everest division, and the Mariners in the Rainier division, who are 60-over. When Tom isn’t playing or organizing league business, he continues to work his ‘day job’. “For the past 26 years I have been teaching broadcasting at Green River College. I continue to get a thrill out of hearing my students advance their careers over the air waves. I supervise student run operations and our degree program. We have many former students on air and behind the scenes here in Seattle and all over the country. Most of our talented students work for music stations, but a number have landed on sports radio stations in markets such as Houston and Las Vegas as well as Seattle.”

Tom’s number one request to us in compiling this story is to make sure we recognize the people around him who make the Puget Sound Senior Baseball League hum. “We have great board members, past and present, who have made the non-profit PSSBL one of the premier adult sports leagues in the country. I wish to thank our current board members and especially highlight those who have the longest tenure on our 15-person board. They make an outstanding leadership team!”

Krause is also thankful for his journey in the broadcasting business. Working as Tom Evans for radio stations around the U.S. meant many public service opportunities including volunteerism, 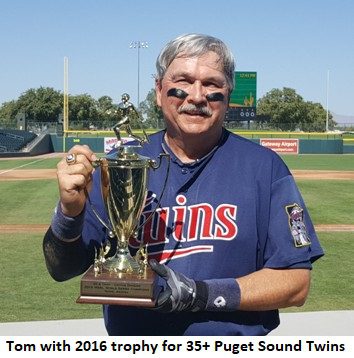 fundraising and other charity endeavors. Those opportunities provided Tom the background to later serve on the boards for his local chapters of Habitat for Humanity, YMCA, the iHeart Community Advisory Panel, and of course the Puget Sound Senior Baseball League.

During Tom’s professional radio career he amassed some special moments involving quite a few music legends. “I have been fortunate to have had some marvelous experiences. Hanging out back stage with the Rolling Stones, singing on stage with REO Speedwagon, and receiving many gold and platinum record awards are some of the highlights. Steve Perry & Journey came in to my broadcast studio one time and took over the whole show, and I was even included in a reception at the White House. Yes, I have had a very blessed life off the diamond as well!” 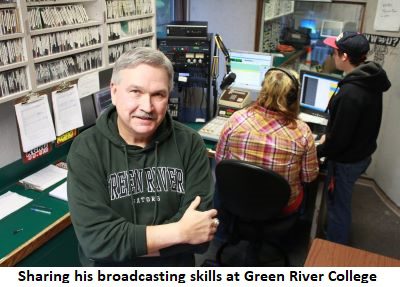 “This Man of the Year honor is mind-boggling. It ranks right up there with those professional career highlights” concluded Krause. “However, it was only made possible by the full backing from my family – my wife and best friend, Nicole, son Andrew and daughter Allison, the great dedication of PSSBL board members over the years, the selfless work of our GM’s, and the continued support of our membership.”

“I accept on behalf of the entire Puget Sound Senior Baseball League, and I thank God every day for so very many blessings and special people in my life. My sincere gratitude to Steve Sigler, Brian Sigler, Tom Prendergast, Steve LaMontia and the entire MSBL organization for this wonderful honor.”