The Mid-Iowa Baseball League (MIBL) is located in and around the Des Moines, Iowa region and was founded in 1994. Now approaching their 25 year anniversary in 2019, we had a moment to speak with current league president and 2016 MSBL Lifetime Achievement award recipient John Linden to discuss where they’ve been and what their vision is going forward. This will also be John’s 10th anniversary at the helm. 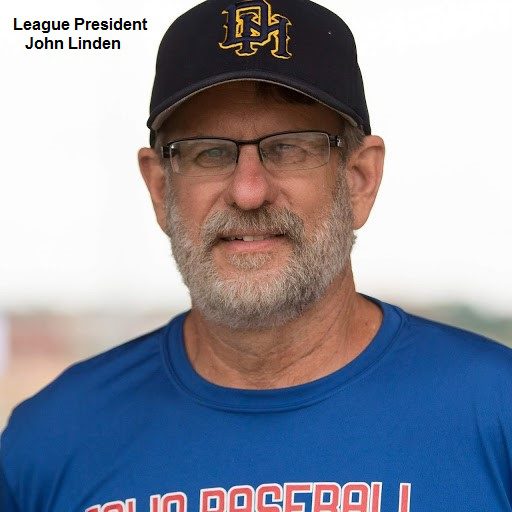 The Mid-Iowa Baseball League is one of the foundations of MSBL and also an annual representative in Arizona for the MSBL World Series. You will always find their teams in the playoffs and more often than not in the thick of things. “This year we’ll be going down with the Bruins in the 25+ division, also possibly a 45+ team and hopefully we will field a Father/Son entry. We also have players that have been free agents in the 40+, 55+ and 65+ divisions. Most players that go once are kind of hooked for life. We love it down there and not only have fun but enjoy the facilities and most teams are usually in the hunt.”

John’s 25+ Bruins World Series team is the current defending 2018 25+ champion in Arizona, which was a “Back- 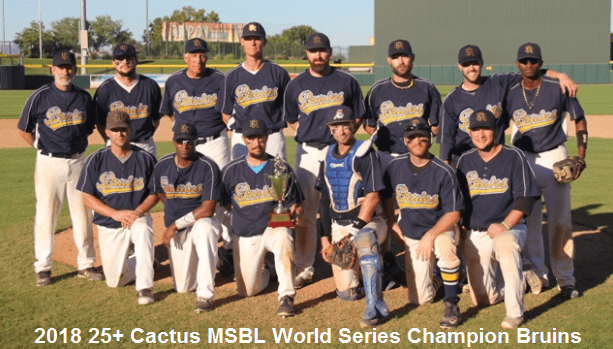 to-Back” year for them as they claimed the hardware in 2017. MIBL’s Iowa Cubs also had a Father Son championship trophy from 2007. A Mid-Iowa representative can occasionally be found in the Fall Classic in Florida, as well as various Las Vegas trips for the Kickoff Classic or Las Vegas Open. “The Bruins won the 35+ championship at the Fall Classic in 2014 and have been the runner up in several World Series at 18+, 25+ and 35+,” said John. “We’re very proud of our MIBL travel teams.”

The league has also tested the regional tournament waters as they hosted the first annual ‘Rally on the River’ this past July in Bettendorf, Iowa. It was a great start on wonderfully turfed fields and they look to build on their success as they continue the event in 2019. “We have contacted leagues in surrounding states and I am hopeful they can bring some teams. Last year we offered 18+ and 50+ play but hope to expand divisions in the future. Past president and 2017 MSBL Hall of Fame member Brian Schueller is in charge of that effort and does a great job as tournament director.”

John’s personal league participation as a player is for the Iowa Oaks (18+), DM Bulldogs (30+) and player/manager for the DM Grays (45+). “I had a major hip injury in 2017. Rehab has me feeling much better and I look forward to getting back out on the diamonds and contributing.”

During John’s tenure as commissioner of the Mid-Iowa league they have contributed to ALS, CapCure, Louisville Slugger Warriors, Breast Cancer, American Heart Association, the Miracle League and various High School and College fields in their region. John is proud of MIBL’s philanthropy commitment of giving back to the community and to worthy organizations. “My wife, Nancy, is a Breast Cancer survivor (Save Second 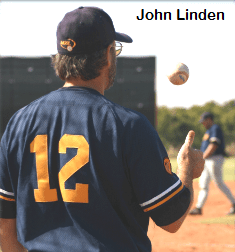 Base) and I am pleased the league stays involved in charitable work,” explained Linden. “I also enjoy coaching for the Iowa Baseball Camp for the Deaf every summer. I’ve been helping out for over a decade now and enjoy every minute.

“My son Tanner is also plays for the Oaks and for the 25+ Bruins and Father/Son teams in Arizona. And my daughter Kristina is an active fan of our Mid-Iowa Baseball teams. I have been blessed with great teammates and some take charge Board members over the years. We look forward to our MIBL 25th anniversary and building for our future!”