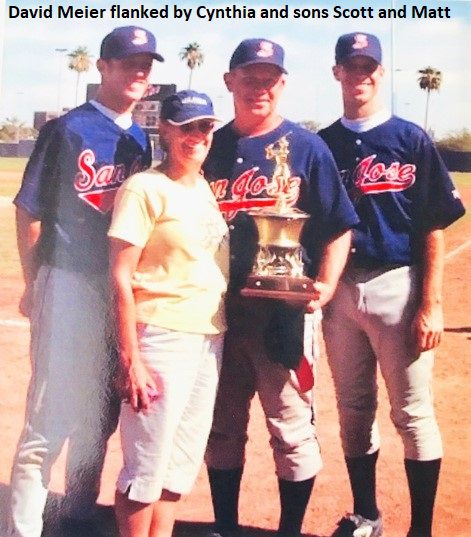 David Meier is one of the founding fathers of the San Jose Men’s Senior Baseball League and has competed at the MSBL World Series in Arizona for the past 26 years, including a Father/Son championship in 2004 with his sons Scott and Matt while his wife, Cynthia was present to take it all in. Davis remains one of the driving forces in the SJMSBL and for his dedication to MSBL and passion for our great game, MSBL Founder and President Steve Sigler has inducted Dave into the 2019 class of the MSBL Honor Roll family.

Dave was kind enough to spend some time with us and share his baseball journey. Read on to get to know more about one of our special MSBL veterans.

Town where league is based: San Jose, California

Where did you grow up? Schenectady, NY

What do you do for a living?

What is your greatest baseball moment, either watching or playing? I’ve been on six MSBL National Division MSBL World Series teams with San Jose, BUT the biggest and most exciting accomplishment was winning the Father-Son MSBL National Division World Series in 2004 with both sons on the field… AND my wife Cynthia in the stands. We all went back again in 2018. We didn’t win but had just as much fun. That is just a special feeling. Never matched. Great memories

When did you start playing for MSBL and how did you hear about it? In the fall of 1987 I came home from a softball game and my wife was standing in the living room holding the sports section and declaring, “I will give you this but you have to give up some softball leagues”. It was a ¼ page add declaring … “Tired of softball…want to play Hardball….Call this number.” It was Steve Sigler’s home phone. He explained what he was doing and asked me to help San Jose become one of the first leagues in the US. The first nine people to call Steve became the original Board of Directors for SJMSBL. I was third to call. We put our own ad in the paper the next week, rented a hall to have a meeting, that turned out to be too small, and then rented out a church. We explained to the group of about 300 men what we were trying to do and asked for volunteers to manage. We got a list of all the attendees and the following week we held a blind draft of everyone who attended. We chose team names, began ordering uniforms and equipment, sought out umpire groups, contacted schools for fields and began playing that very next spring. I have been on the Board every year since and have managed a league team for the past 28 years. 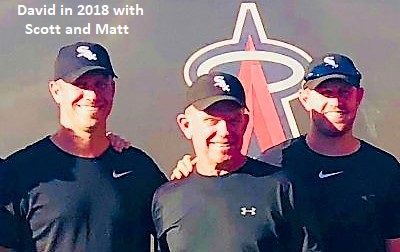 Do you still play? I’m 68 going on 69 and have been playing since day one and will be playing again this year. I also planning to go to back to the World Series in Phoenix again this year.

What team and age bracket? I currently play on the San Jose MSBL White Sox 25+ team and the 55+ Pirates

What is the best thing about your league? My friends on the SJ MSBL board and league managers.

The people. The competition. Every weekend I’m surrounded by people who get as much enjoyment out of playing this children’s game as I do.

Do you participate in any MSBL national tournaments? I’ve participated in the MSBL Phoenix World Series about 26 times, as recently as 2018 and most recently the 55+ Palm Springs Desert Classic. We won the 55+ American division. It remains a thrill to play in the tournaments and I still fun

Who is your favorite player of all time and why? Mickey Mantle. I’m from New York and got a first-hand look at his speed, power and skill. I wanted to be him. I have an autographed baseball that my wife bought for me

Are there any additional personal comments you wish to add about your playing or life thus far? I am thrilled every year looking forward to playing in San Jose, playing and then traveling to Phoenix for the World Series. I look forward to seeing old friends and making new friends. We are all playing to win, but still playing for fun and loving the competition.

Are there any comments about MSBL you wish to share? If you love baseball, love the competition and making friends for life, the MSBL is the only place to be. “Don’t go Soft…Play Hardball”