October 27, 2019, Hohokam Stadium, Mesa, Ariz. – The top half of the batting order for the Diamond Dogs provided all of the offense they needed to overcome a strong Mexico team in the Father/Son Federal Division championship at Hohokam Stadium. Sons Matt Powers and Ryan Dimascio set the table at the top of the order scoring four runs and son Mike Geannelis drove in four runs out of the cleanup spot for the Diamond Dogs. 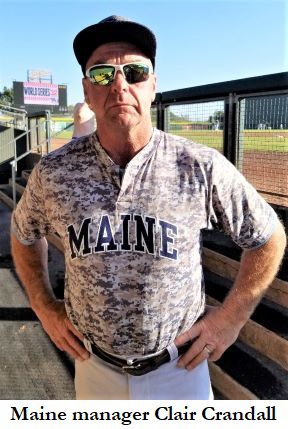 “That’s how you build a lineup by getting guys at the top of the order that get on base and know how to run the bases to put pressure on the infielders,” said Maine manager Clair Crandall. “Then you put a four hitter up there that’s going to put the head of the bat on the ball.”

Maine father Chris Fuemeller dazzled for the last five innings on the mound allowing just two hits against a talented Mexico offense to earn the win. He was able to keep Mexico off balance by working all over the strike zone and mixing speeds.

“We had a really good scouting report on Mexico that they hit the ball better against hard throwers like our starter, Matt Powers, and they did,” said Clair Crandall. “Chris (Fuemeller) kept Mexico off balance by throwing three different pitches to four different quadrants of the strike zone.”

After falling behind early 3-0, Mexico battled back in the bottom of third inning scoring two on sacrifice flies from father Florentino Reyes and son Joey Haskell. The Diamond Dogs responded with two more in the fifth on a two-run single by Mike Geannelis and Mexico would only be able to muster three baserunners the rest of the game.

Despite not being able to secure the title, Mexico did not go home empty handed. About 11 of Mexico’s players made the trip to the World Series in a van driving up from Chihuahua, Mexico. Two of the dads that come from Mexico coach local teams back home and while visiting the U.S. for the 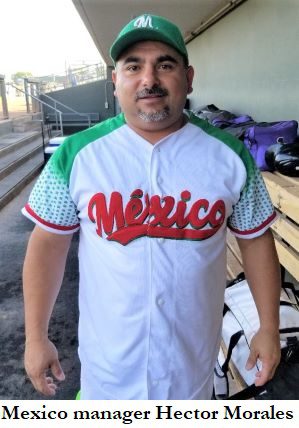 tournament they go shopping for baseball gear at Play It Again Sports to take back to the kids.

“The dads try to get used equipment and get whatever they can to take back to the poor kids in Mexico,” said Hector Morales. “They go back home and show the kids pictures of how it is in the U.S. and the opportunity here and it’s pretty interesting how it works out.”

In pool play the Diamond Dogs scrapped to a 2-2 record. In the first game of pool play Maine gave up 8 runs in the first two innings to Minnesota Crosstown Traffic and dropped the game 10-7. Maine also had a tough loss to Mexico 7-5 during pool play.

Mexico cruised to a 5-0 record during pool play behind a very strong offense and pitching allowing just 13 runs in the five games.

The Diamond Dogs mashed their way to a 13-6 win over Minnesota Crosstown Traffic in the semis. After defeating Mexico in the championship game they were able to avenge their two losses from pool play.

In the semis Mexico defeated Pro Bats Yankees 7-3 in a what manager Hector Morales described as a “nail biter.” Mexico had to make a couple of critical pitching changes throughout the game that worked out for them to earn a bid to the championship game.