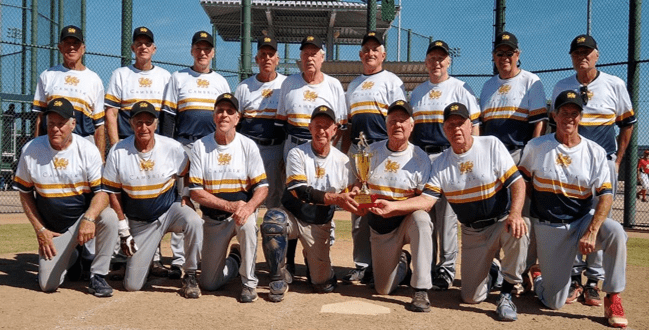 October 27, 2019, Fitch Park, Mesa, AZ – An explosive offense led Cambria to the 73 Plus Championship Game. But that offense was shut down before rearing its head leading Minneapolis Cambria to a walk-off win over defending National Champion Sacramento Solons, 14-13. 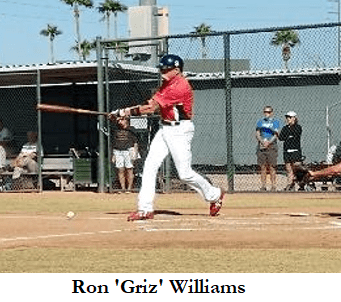 “We don’t know if we have runners that can hit or hitters that can run,” Cambria Manager Paul Smith acknowledging an edge his team may possess.

Solon starting pitcher Jimmy Allen held that offense at bay helped by a diving stab by Ron “Griz” Williams at third base starting a 5-4-3 double play in the fourth inning. Cambria came alive the third and fourth time through the order against Allen, though, erupting for 11 hits and nine runs to tie the score at 12.

The Solons jumped out to a 12-3 lead keyed by a five-run fourth led by “Griz” Williams’ triple with two on. He continued and scored on a throwing error. Six straight Solon batters reached base in the fourth. The Solon’s fifth inning started slowly with two quick outs, then a walk to Harry Hart 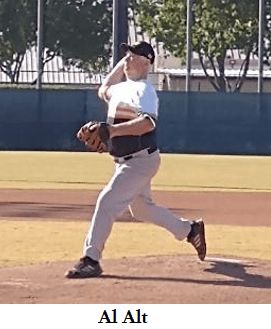 Solon’s Ken McAtee one-out single to right in the top inspired a three-run sixth. But McAtee’s inspiration is deeper with his teammates. Lanny Ropke says of his teammates, “Most of us have played together for 25 years. We have one rule: you have to have the right personality!” 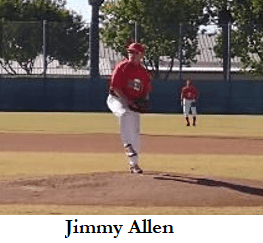 Ribbing each other is a sign of respect and belongingness. They might affectionately rib McAtee as ole Blood and Guts. McAtee has blood cancer. He endures blood transfusions regularly, but the grind of the tournament necessitated more frequent transfusions. McAtee went 3 for 5, but bats 1.000 with his teammates.

Cambria pitcher Al Alt weathered the Solon storm keeping Cambria within striking range. “I knew our offense would eventually get going,” Smith said. And explode it did.

Not only did he pitch, but Alt helped his own cause with three hits, two runs, two RBIs, and was a home run short of a cycle. It was fitting that Alt started the offensive explosion with a triple to start the sixth. After a single by Mark Lillendahl, Dave Weber roped a double driving in two. Five successive hits and a Solon error pulled Cambria within four. That gap disappeared as Cambria started the seventh with four consecutive runs forcing Solon to bring in Irv Scott. Scott induced Cambria’s leading hitter Freddie Krause to fly out to left, ending the threat.

But Cambria came all the way back knotting the score at twelve. In the top of the ninth the Solons loaded the bases with Alt avoiding Griz via intentional walk, but Denny Brown grounded out 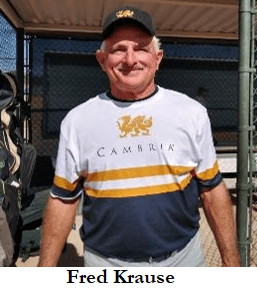 plating Hiro, giving the Solons a one run lead.

Solon’s Scott battled not only a pulled hamstring, but three straight hits marked by a hard-hit double by Marv Eckerle, driving in Degerness to tie the score. Larson then took a pitch off the arm setting up Krause. Krause lined the second pitch into the right field gap driving home Billy Shields with the championship run. The combination of Krause driving in Shields decided three of Cambria’s five tournament wins.