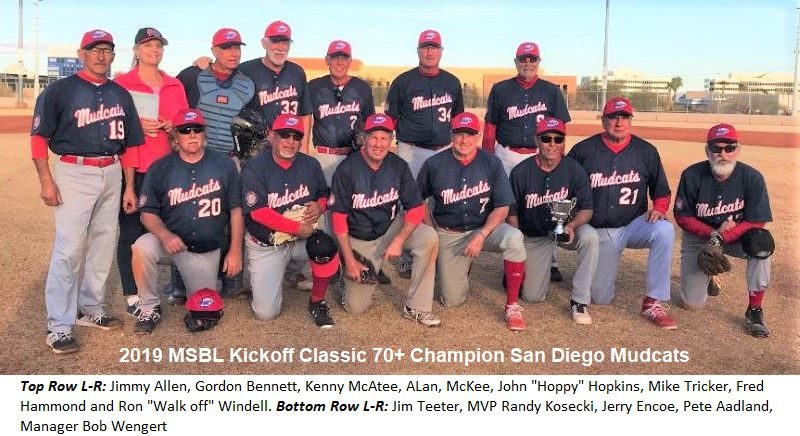 The San Diego Mudcats earned their second Las Vegas title in as many weeks with a 14-2 win over the Philadelphia Phillies to capture the 70+ title in week two of the MSBL Las Vegas Kickoff Classic. The championship game started much the same as pool play game one as Mudcats starter John Hopkins faced the Philadelphia Phillies just as he had in the opener, a 12-9 complete-game victory.

It was a tight 1-1 ball game until the Mudcats pushed across four runs in the bottom of the third. Hopkins benefited from some good San Diego defense for six innings giving up only one unearned run when relieved by Jimmy Allen in the seventh.

After the Mudcats bats came alive scoring six runs in the bottom of the sixth, the ‘Cats went for the mercy-rule knock-out in the bottom of the seventh when “Walk-off Windell” knocked in courtesy runner and tournament MVP Randall Kosecki, who went 4-4 in the championship game. MVP Kosecki was playing in his 32nd year as an MSBL player. Impressive series hitting was also recorded by Kenny McAtee (.733), Joe Kelleher (.727) and Bob Wengert (.727).