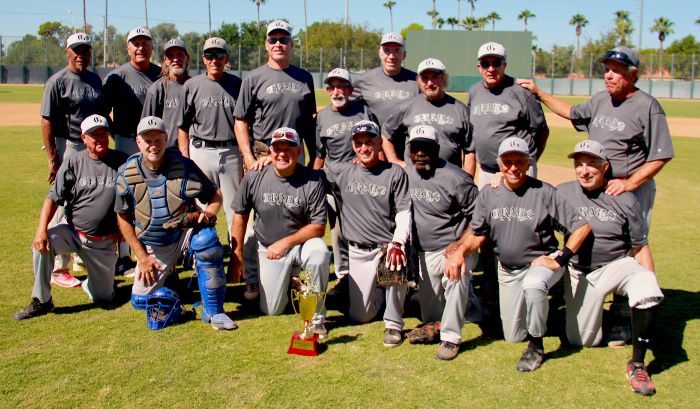 October 19, 2019, Mesa, AZ – For about 20 minutes Dan Doleshal thought his team might be in for a long game. The starting pitcher for the Chicago Grays gave up four runs in the top of 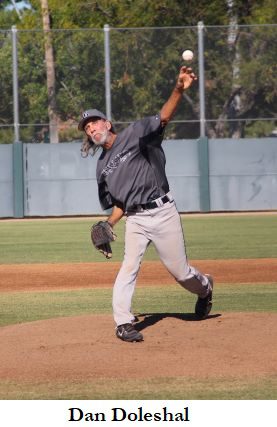 the first against the San Antonio Texans, its opponent in the 70 Central championship game at Fitch Park in Mesa. Doleshal, a wiry, long-haired lefty with a slick, slow breaking curve ball, allowed four hits and threw 26 pitches in the first frame. “Actually, it started out like we were in trouble,” Doleshal said. “They looked like they were very hitterish, but fortunately we got out of that inning without much damage.”

When Chicago got its chance to bat, the Grays (8-0) responded like they knew they could. An explosive offense featured patient at bats, line drives, hard ground balls and deep fly balls. Chicago scored five runs in the bottom of the first and eight in the second to take a 13-4 lead. Doleshal began to feel more comfortable on the mound. “Once we got to hit and put up a bunch of runs I felt more confident and settled down,” Doleshal said. “Everybody started playing ball like we have all week.”

Adding insult to injury, Chicago erupted for 10 runs on nine hits in the third inning. The game ended after San Antonio (5-3) batted in the top of the fourth. Both managers agreed, after two-and-a-half hours, to stop with the score 23-5. “They were out of our league,” Texans manager Bill Burgess said, shaking his head as he walked to the parking lot.

Doleshal threw 74 pitches, allowed eight hits, struck out two and earned the win. After the game he headed to nearby HoHoKam Stadium to begin 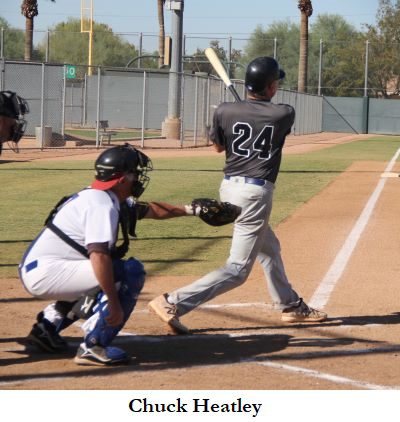 another tournament, this time in the 65 and over age group. Tom Keyser, the first of four San Antonio pitchers, suffered the loss. Chuck Heatley was named MVP for the Grays. He was 3-4, as was George Karas, who batted in the two spot and bunted twice for hits. “It’s probably the best hitting team I’ve ever played on,” Heatley said. “One through 10 are unbelievable hitters. That’s why we won.”

The Gray’s manager, Steve Faigin, said during the tournament’s eight games his tall first baseman batted over .800, earned two victories on the mound, and got hit by nine pitches. “Heatley played great,” Faigin said. “You couldn’t get him out.” Chicago’s Kenny Overton was 3-4 with two doubles and four RBI. Rob Ruether was also 3-4 with three RBI. John Keith was 3-3 with two RBI. He scored four runs. Fleet-footed lead-off hitter Walt Weatherington was 3-3 with three RBI. 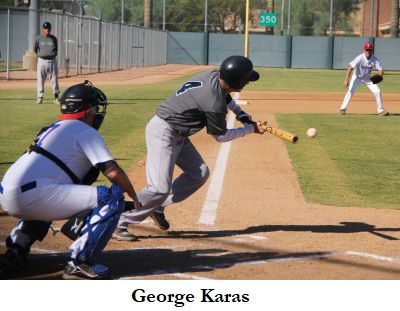 In the dugout after the game Faigin pointed out the obvious. “Today’s game was just about hitting,” he said. “This team could flat out hit. We could outhit any opponent we faced. We played our game, which was pure hitting all the way.”

Faigin was equally pleased with Doleshal, who was not overpowering, but very effective. “Dan is a veteran,” he said. “He’s been pitching for a long time. He knows how to throw strikes. He knows how to pitch.”