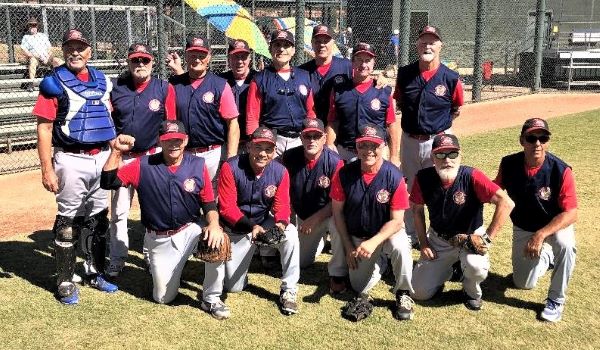 ‘Hopkins Takes Charge on the Bump’

October 19, 2019, Mesa, Ariz. — With only 14 players on their roster, the North County Mudcats needed every one of them to contribute at the MSBL World Series. That was the only way they would beat the Lehigh Valley Moondogs and win the 70+ American Division championship.

And that was exactly what happened.

The Mudcats pounded out 28 hits and scored at least one run in seven of their eight innings at the plate to beat the Moondogs, 19-3, and capture the title.

“It’s tremendously exciting and totally unexpected,” Mudcats manager Bob Wengert said. “We never thought we would get this far. But we really hit the ball really well.”

That’s an understatement. North County hit, and it did so all week. The Mudcats scored at least six runs in each of their seven games, which were all wins, and scored 15 or more five times. Their highest scoring output was 27, which they did twice, in earlier wins over the Tri Valley Antiques and the Sacramento Solons. 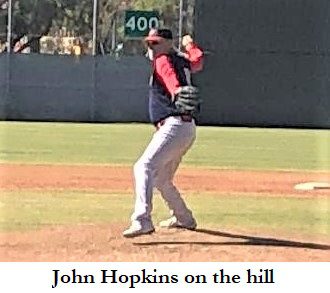 In the championship game, the Mudcats wasted no time continuing their hot hitting. They scored a run in the first inning on an RBI single by Pete Aadland. Then, North County put together a huge second inning, scoring six runs on four hits and a pair of Lehigh Valley errors while sending 11 batters to the plate.

“Boy, they got hot,” Wengert said. “And they got key hits at key times. When men were in scoring position, they hit.”

The Mudcats kept the pressure on offensively for the whole game. They had another six-run inning in the fifth, which stretched their lead to 15-1.

Meanwhile, John Hopkins did his job on the mound for North County. The right-hander allowed two runs over seven innings to earn the win, consistently working out of trouble.

In the first, Hopkins loaded the bases with two outs, but he induced a groundout back to the mound. He worked around leadoff hits in the fourth and fifth without allowing a run. And although he gave up leadoff knocks in the third and sixth, he held the Moondogs to one run in each of those innings.

Hopkins credited his offense for giving him plenty of run support, which made him more comfortable on the mound.

“Believe me, as a pitcher, it’s easy. I just get up there and throw the ball and let my defense and my hitters do their job. It makes it fun, too,” Hopkins said. “These guys are great guys. They’re fun to be around and they’re good ballplayers. Phenomenal.”

“Our offense really was the strength of this team,” Wengert said. “And we played well defensively, too. I think all around it was a great effort by a small group of guys.”

But perhaps even more important than the Mudcats’ offense? Their health. With such a small roster, an injury or two would have hurt them worse than some of the other teams in the division.

“We stayed away from injury. That was our fear,” Wengert said. “We were afraid that if we got a few guys hurt we’d really be thin.”

And that may have not just been luck. Hopkins credited North County’s good health to its players’ physical fitness.

“It’s almost remarkable to be able to do that, because out of the 14, I can only maybe think of one guy that’s got a little bit of a gimp,” Hopkins said. “So I’m really impressed that everybody stayed healthy, and that shows you what kind of ballplayers they are. They stay in shape and they’re ready to play over here.”