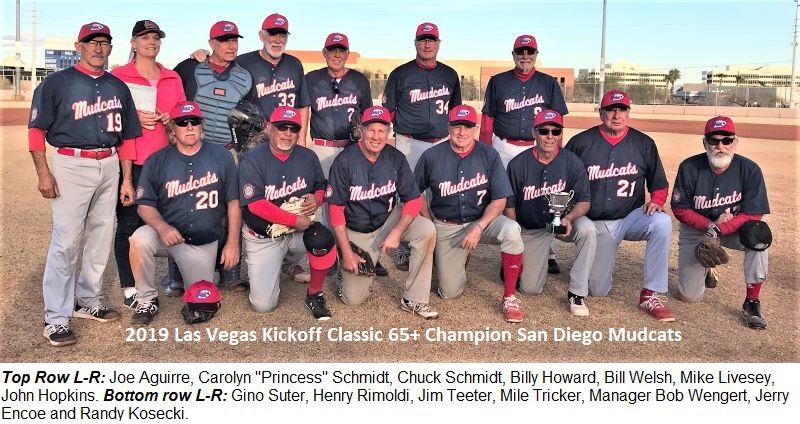 The San Diego Mudcats prevailed against two formidable opponents Monday, March 7, in the 2019 Las Vegas Classic playoffs. The Mudcats brought only 13 team members and two of them got injured. To win, the old team (five players over 70), matching up with great opposing defenses, would need some timely hitting.

The morning semi-final game featured the 2-seed Tri Valley Antiques versus the 3-seed Mudcats. The Mudcats were looking for some symmetry after falling to the Antiques 4-2 in their first contest on a 3-run homer in the bottom of the seventh by the Antiques’ Dale Skinner. The Mudcats had led the whole way on a complete game gem by starter Billy Howard. In the playoff game the Mudcats took a 3-0 lead, giving it back in the third inning, then falling behind 7-3 in the fifth. However, the ne’er say die Mudcats scored two in the eighth and exploded for five runs in the ninth to earn a shot at the championship game, 10-7. 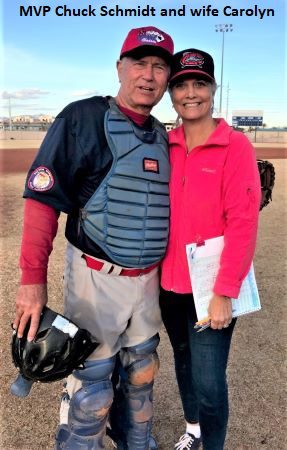 In the championship game, the Paladins drew first blood on a pair of first inning miscues. It would be another back-and-forth game. Mudcat starter Mike Livesey, who had just earned the win and pitched the final four innings of the semi-final match, went 3.1 innings giving up only the tainted first inning run. The other Mudcats workhorse, Mike Tricker, who started and pitched the first four innings of the morning game, completed the next 3.2 innings, also limiting the Paladins to just one run.

After the Mudcats scored two runs in the fourth inning to go ahead, the Paladin came back with one in the sixth to tie the game. The ‘cats struck once more in the seventh on a clutch two-out RBI single by iron man Chuck Schmidt and again in the eighth to take a 4-2 lead, only to give up two sun-aided runs in the eighth to tie the game at four apiece.

But in the top of the ninth, Mudcats’ Mike Tricker singled, Randy Kosecki capped his 4-4 day with a single and MVP Schmidt singled to load the bases. Pitcher Jim Teeter drove in the go-ahead run with a bases-loaded shot to right-center field ending his weekend on a 17-for-22 tear.

The Mudcats scored four in the top of the ninth to increase the lead to four while in the bottom of the ninth Teeter closed the game with a strikeout and a game-ending double play up the middle and the trophy was secured.