October 25, 2019, Phoenix, AZ — Gary Fritz was in total control on the mound. And Minnesota Bandits manager Frank Hanford was never going to take him out of the game. He also never needed to.

Fritz turned in a dominant performance in the 65+ National Division championship game, notching a complete-game victory to lead the Bandits to a 3-1 win over the L.A. Athletics and the division title. It was a strong week for Minnesota’s pitching, as it never allowed more than three runs in any of its six games, which were all wins, and Fritz capped it with one of the best outings of the week. “There’s no way he comes out of the game,” Hanford. “So you just sit back and let him do his thing.”

And for most of those nine innings, Fritz cruised. The right-hander retired 14 consecutive batters to open the game, before giving up a two-out single in the fifth. After a stolen base gave the Athletics a runner on second, Fritz notched a strikeout to escape unscathed. That was also the start of another dominant stretch for Fritz, who retired 10 straight beginning with that strikeout to end the fifth. 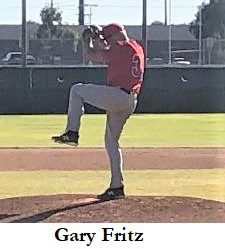 Entering the ninth, Fritz aimed to protect a 3-0 lead. Although he gave up his first run when L.A. was down to its final out, Fritz finished it off to complete a stellar two-hit performance. “This is really what you come out here for, you don’t come out here for the 16-2 game, you come out here for the quality opponent and you’re playing well and they’re playing well, and it’s good ball,” Fritz said. “Even at 65, it’s still exciting to me. And everybody out here likes a challenge. That’s what we’re really out here for, is the competition and camaraderie. You’re not out here going to cry if you lose, but if you win, it’s a satisfying feeling.”

The Bandits’ defense behind Fritz played a big part in the victory. The Athletics had 13 ground outs and 10 outs on balls hit in the air, while Fritz notched four strikeouts. Second baseman Chuck Sendelbach had a particularly strong defensive game, recording three outs and six assists. That strong defensive play factored into Fritz’s strategy on the mound, as he felt confident he could get outs if the balls stayed on the ground.

“We just got lucky enough that a lot of the balls that they hit were at people and we played well and we won,” Fritz said. “It was a nice team effort on our part.”

However, Fritz took one different approach from the last time he faced the Athletics. Instead of overpowering them with fastballs, he used another pitch as his primary weapon. “It was really kind of odd, the last time I faced them, I threw about 90 percent fastballs, and today it was 60 percent breaking pitches,” Fritz said. “Today I had a curveball that worked, and it was the first time in about a year or so, I was thrilled to death to be honest.”

The Bandits’ offense gave Fritz enough run support for the win. In the second, Minnesota took a 1-0 lead when Bob Britz led off with a single and later scored on a Rick Boyer sacrifice fly. Rich Sagen had an RBI single in the fifth and Bob Heiderscheit provided a late insurance run with an RBI single in the eighth. Using those timely hits, Fritz’s terrific pitching and near-pristine defense, the Bandits capped their exciting week with a championship.

“This is what you come out here to play for, play another good team and really see how you measure up,” Fritz said. “It was a great game.”