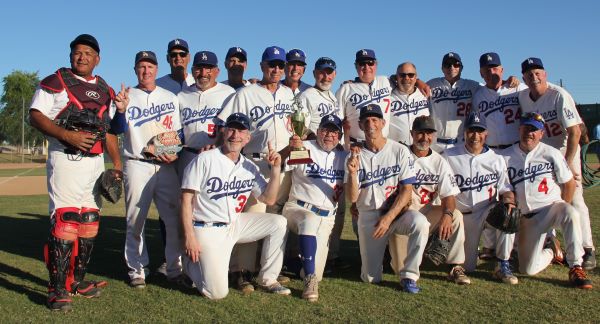 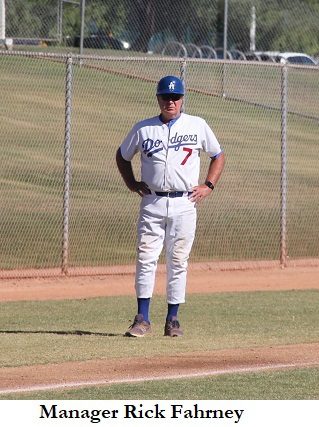 October 25, 2019, Phoenix, AZ – The Dodgertown West Dodgers (8-0) won its first championship since 2004 with an 11-8 victory over the Puget Sound Mariners (6-2) in the 65 plus Cactus Division at Maryvale Park in Phoenix. Lefty Tom Ebert, 76, earned the win. Ebert pitched five innings and allowed three runs on six hits. “When I got up this morning I had a real good feeling,” Ebert said. “Normally, I get really nervous before a game and I didn’t feel that too much this morning. And so when I was out on the mound the ball was moving around and going where I was trying to throw it. After 23 years of doing this, I finally got my first ring, so it is sweet. It’s almost like it’s poetic justice.”

Steve Chase and Dave Schneiderman combined to pitch the last two innings in relief. Offensively, the Dodgers were focused, balanced and confident. Their entire line up contributed in some fashion. Jesse Woods and Jack Sills had two hits apiece, while Steve Ashman knocked in three and Albert Ulibarri added two RBI for the Dodgers.

Rick Fahrney, manager of Dodgertown West, was thrilled with the win, especially for Ashman, who suffered a stroke in September, and Ebert. “Tom Ebert has 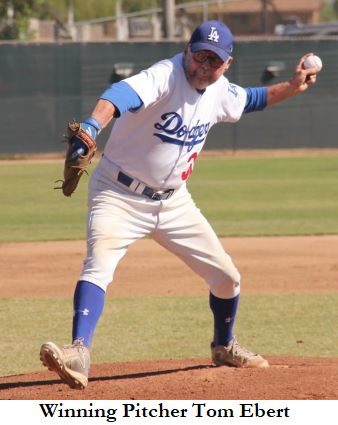 been playing out here for over 20 years,” Fahrney said. “He’s never won a ring. He stepped up in the championship game and was nails. He threw a great game for us. We won like we did all week. Everybody steps in.”

Ashman knocked in the first run for the Dodgers with a ground ball to shortstop in the fourth. The following inning he added another big hit. “This guy is our heart,” Fahrney said. “Sometimes it’s the guy that has the pulse of the team and can draw us up and reach them.”

Ashman was grateful for the chance. “It means everything,” Ashman said. “Five, six weeks ago I was lying in a hospital bed wondering if I was even going to be able to move. I called (Rick) up and told him I’d be there. Everyone on this team genuinely loves each other. They really do. So, to just be here is just the best.” 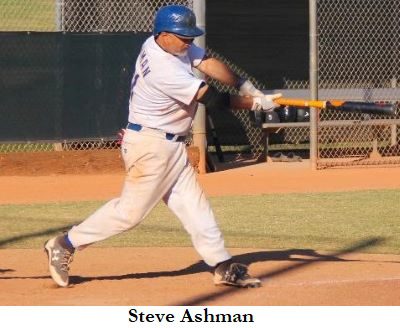 Bob Whitacre pitched 5 2/3, allowed six runs, and suffered the loss for the Mariners. He hit three batters, struck out four and walked two. Early in the game it looked like Puget Sound would prevail. The Mariners scored a run in the first to take the lead. Charles Jeffers was hit by a pitch. Murphy Appling moved Jeffers over with a SAC bunt. Lonnie Bloom singled, but Ebert picked him off first. In the ensuing run down Jeffers scored. Puget Sound added two more in the fourth to go ahead 3-0 as Randy May, Tag Gleason and Doc Lathrop singled.

The Dodgers scored once in the fourth, then exploded for five runs in the fifth with two outs. Brad Seto reached on an error, and Schneiderman, Lance Parker, Woods and Sills singled to knock Whitacre out of the game. Ashman immediately welcomed reliever Phil Talmage with a single that scored two. “We’ve done that a couple games this year,” Fahrney said, “where we’ve come from behind with two outs. But their team is very good and they came at us the whole time, but the floodgates opened in that inning.”

The Dodgers added runs in the sixth and seventh and three more in the eighth to take an 11-6 lead. In the eighth Rick Ruben singled, J.R. Riley dropped down a SAC bunt, Schneiderman reached on an error, Parker walked and Ulibarri smacked a two-run double. Puget Sound threatened in the top of the ninth, scoring two, loading the bases, and bringing the go ahead run to the plate, all with two outs. But Schneiderman got Gleason to pop up to third, ending the rally.

“We got good pitching behind Tom,” Fahrney said. “The next two guys stepped up. But it’s been 15 years since we’ve won the ring so we’re pretty happy about it.” 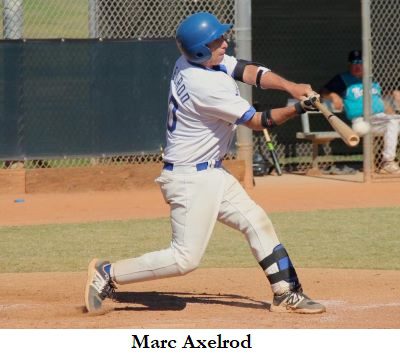