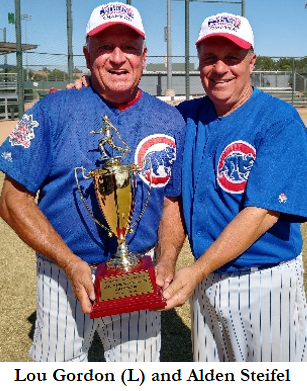 “We’ve been playing with each other for years,” Cubs manager Alden Stiefel says. The Cubs were in the championship game in 2018 and 55+ World Series Champs in 2013. And together both teams played stellar defense and possessed solid pitching.

The Cubs broke through first in the bottom of the third inning with a one out single by Rich Gentile. Gentile stole second, was followed by a sacrifice bunt by Dan Kraiss, moving Gentile to third where he scored when Tom Behringer hit a shot over the Angels right fielder Phillips’ head.

The game seemingly broke open in the bottom of the fifth when the Cubs plated four. The rally was again induced by the bottom of the Cubs lineup. “There is no MVP on our team. All 21 of us contribute and support each other,” Stiefel commented. A sacrifice bunt by Gentile was the big blow in the fifth. An errant throw by Spelman scored Mike Criscione and put runners on second and third. Kraiss’ safely squeezed home Tom Baer, which was Kraiss’ 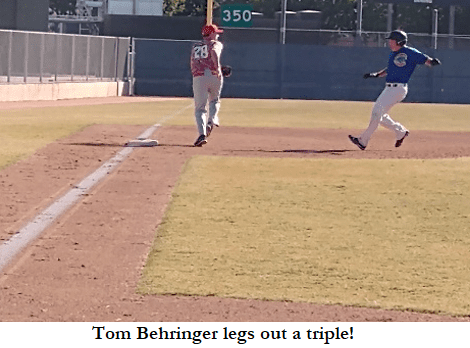 second sacrifice in two at-bats. The Cubs played “Small Ball” executing four sacrifices in the game. Behringer then roped a single to center scoring Gentile, opening up a four-run lead, five to one.

The threat seemed to be over when Spelman picked Behringer off first, but an errant throw into left field allowed Behringer to reach third. He scored as Mike Tiegs drilled a 2-1 pitch into left, chasing Spelman. On reliever Tony Escamillo’s first pitch, Polk threw out Teigs on an attempted steal. Bruce Grossman then grounded out to Fleisch at shortstop to end the inning.

The Angels didn’t hang their heads, though. Poleto understood his team. “Some of our players are dealing with some health issues. One is 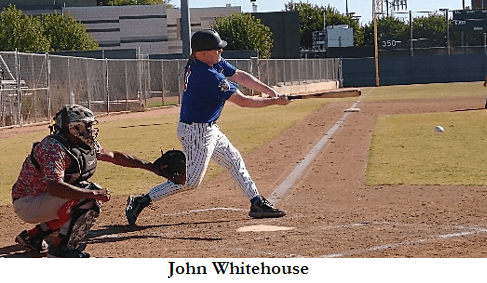 getting heart surgery after the Series. Playing the game of baseball absolutely helps the spirit overcome those issues!” After one out in the Angels sixth, three straight singles by Ocampos, Madden and Fidler plated one. But the big blow came from Tony Escamillo when, on a full count, he cleared the bases with a triple down the left field line. The Angles were back in the game with the score now five to three. But Escamillo could not get the needed shut down inning as a two-out walk to Kurt Bruksch came to haunt him with Mike Schmadeback’s double to right center.

The Angels mounted a rally in the top of the seventh with Schuler’s leadoff double. Stiefel walked Polk and was at 96 pitches. Steifel threw a complete game shut out against this same Angels team two days earlier. After a diving catch by third baseman Kraiss, Bruksch, pitching in relief, walked Voorhen. Kraiss then threw a softly hit ball into right field scoring Ender, cutting the lead to two. But Bruksch struck out Madden to end the threat.

Art Busby came in to save the game for the Cubs in the top of the ninth.

Cubs win! Cubs win! With the 7-4 victory, the Northside can say it all together again this year with the 60+ Chicago North Cubs.