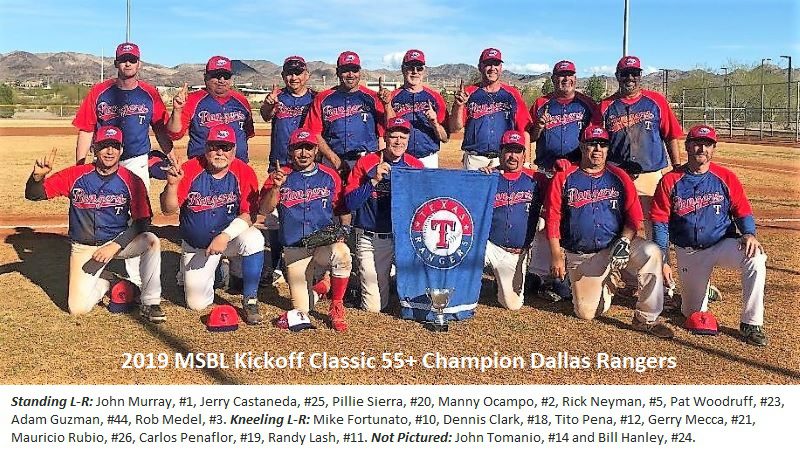 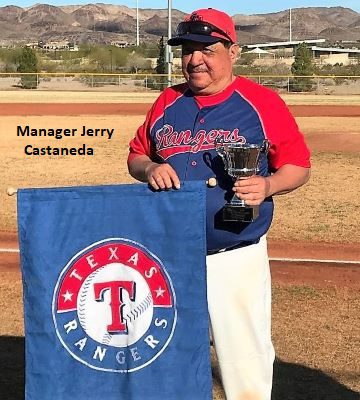 Despite seeing its four-run lead whittled down by game’s end, the Dallas Rangers, managed by Jerry Castaneda, still held off San Diego North for a 7-6 victory in the MSBL Las Vegas Kickoff Championship 55-over game at Heritage Yards in Henderson, Nevada on March 4, 2019.

The Dallas Rangers fired up the offense in the first inning. Shortstop Randy Lash doubled on a 0-1 count, scoring one run. Dallas then tallied three more runs in the fourth inning and two more in the fifth to take a 6-2 lead. The Rangers scored their three runs on an RBI triple by center fielder Tito Pena and another on an RBI triple by first baseman Adam Guzman and then finished the fifth off with an RBI single by right fielder Mike Fortunato, scoring Guzman. But San Diego North would not go away. They scored three runs in their half of the fifth inning to close to 6-5 with their bats starting to get to Rangers right-hander Pillie Sierra.

After the Rangers tacked on an insurance run in the top of the seventh on Fortunato’s double scoring left fielder Rob Medel, semi-final winning pitcher John Murray relieved Sierra and held San Diego North scoreless until the bottom of the ninth when, with one out, Murray uncharacteristically walked two and uncorked a wild pitch scoring San Diego North’s sixth run. But a fly-out to Medel in left and a ground out to Lash at short sealed the victory for 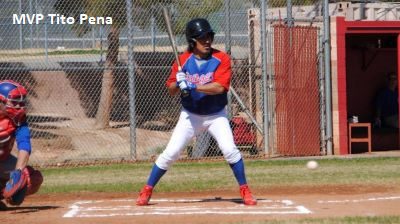 Sierra went six innings, allowing five runs on 12 hits, striking out none and walking one for the win. John Murray threw three innings in relief out of the bullpen. Murray recorded the last nine outs to earn the save for Dallas. Bitner took the loss for San Diego North. He allowed seven hits and four runs over three and two-thirds innings, striking out four.

The Rangers saw the ball well today, racking up 14 hits in the game. Guzman, Fortunato, Mauricio Rubio and Gerry Mecca all had multiple hits for the Rangers, with Fortunato and Guzman each collecting three hits. Tito Pena was named tournament MVP batting .500 for the tourney including a team leading three triples and eight RBI.