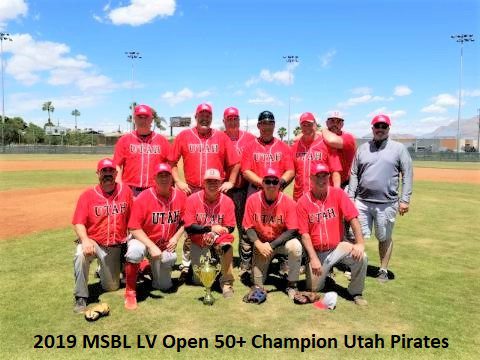 The Utah Pirates battered a depleted Tiger pitching staff with 26 hits, 12 being extra base hits, including one home run by Cale Shepherd. It was a close game through four innings, but the Pirate hot bats kept on hitting.

Andy Campbell pitched all nine innings for the win. We saved him for the end and it payed off. Brent Oldroyd went 5-5 with three doubles, Allen Zentgraf and I both went 4-5 with two doubles apiece. Tiger’s lead-off batter Erhardt went 3-4 with a home run in the third inning to make it 5-4.

The Pirates scored 94 runs in five games and had a team batting average of .472. I think it’s the best we have ever hit in a tourney, of course the slight breeze blowing out all weekend helped. Duane Lee led the Pirates in hitting for the tourney going 13-20.

In the Semi’s the Pirates had to rally late to hold off the Tri Valley Vets after they tied the score 4-4 in the seventh, with the final score ending up at 14-7. They played us well and it was a good game. The CC Tigers beat the Las Vegas 55’s 12-11 in the Semi’s to reach the finals.