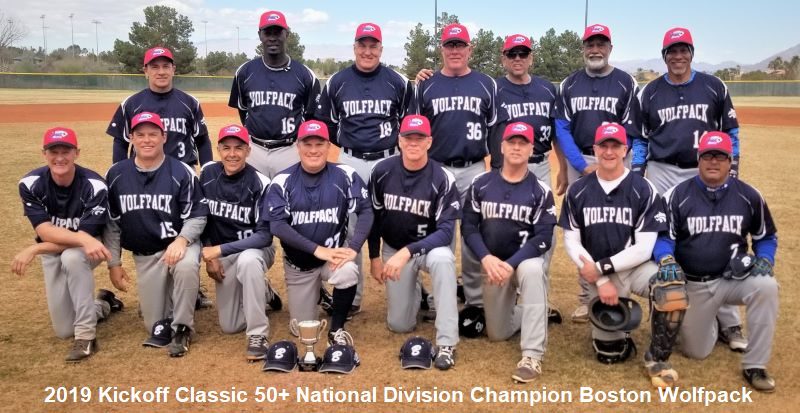 Things played out as the bookmakers expected with the MSBL Desert Classic Champions meeting up with the MSBL Holiday Classic Champions in the 50+ National Las Vegas Kickoff Classic finals. And the game was an instant classic with the Boston Wolfpack coming from behind in the bottom of the ninth inning to snatch a 5-4 victory over the 3n2 Rangers.

Both teams went 3-0 in pool play and, as top seeds in their respective divisions, met up for the National Division final. The Wolfpack jumped ahead early with three runs off of MLB All-Star Jeff Cirillo on hits by David Oliver and Russ Ward and a perfectly executed safety squeeze by David Benedict. But the Rangers battled back with Mo Jackson tripling in two runs in the sixth off Wolfpack starter Jim Kearschner and two more in the seventh on a Phil Hayden triple to take the lead. Boston’s chance to tie the game in the bottom of the seventh failed when Cirillo hustled after an errant throw and gunned down Mike Smith at the plate.

The bottom of the ninth started with back to back strike outs. Then singles by Benedict and German Rivera set up the game’s final at bat with Jose Delgado crushing a 2-1 pitch to deep left field to plate the tying and winning runs. Smith got the win with two innings of hitless relief. Delgado went 3-4 in the game and took home MVP honors.