October 18, 2019, Tempe Diablo Stadium – The Boston Wolfpack cashed in on an insurance policy in the ninth inning and hung on to a 5-3 win against Team Victory in the 50+ National Championship game. David Oliver’s RBI single in the top of the inning gave the Wolfpack a two-run cushion and pitcher Dave Benedict made it hold up. Benedict tossed a complete game, scattering 15 hits without walking a batter and relied on a solid defense for the win. “My catcher called an awesome game and I knew that if I executed the pitches he called we would have success, said Benedict. “There is nothing better than getting the final out of a championship game. It is just an awesome experience.” 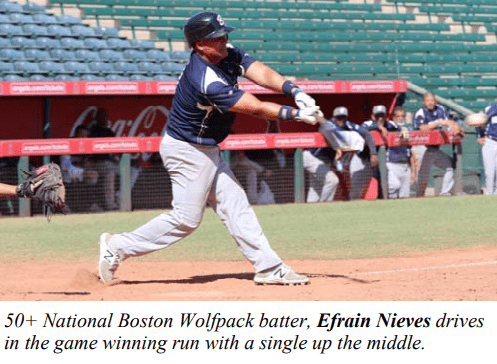 The game was a back-and-forth affair. After three scoreless innings, the Wolfpack drew first blood on an RBI double by Jose Delgado in the fourth. Mo Hawkins drove in the tying run in the bottom half of the inning for Team Victory. In the fifth, a double by Luis Cordova and singles by Efran Nieves and Eddie Fuller produced two more runs for the Wolfpack. Team Victory fought back by scoring a run in the bottom of the inning on an RBI double by Pokey Sanchez. The Wolfpack used an error by Team Victory in the seventh to build the lead to 4-2. Each team would manage one more run; Isreal Gonzalez’s RBI single in the bottom of the seventh narrowed the margin to 4-3, but that was as close as Team Victory could get.

For Benedict, it was the first game on the mound in the tournament. “I played shortstop in every other game, but was called on to pitch in this game,” explained Benedict. “I had a lot of adrenaline going. I knew that I just needed to get it up there in a good spot and the guys would make plays behind me.”

In pool play, both teams finished with 5-1 records, but Team Victory earned the home field through a tiebreaker. In the semifinals, the Wolfpack nipped the OC Sox 4-3 and Team Victory outlasted US Baseball 14-10.

“It was a great ride to get here,” said Team Victory Manager Robb Munson. “We are kind of shorthanded with only 14 players on the roster, so it’s remarkable that we made it this far. I feel 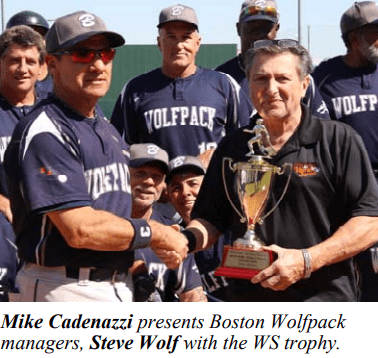 personally blessed to get to come out here and play in the World Series…what a great experience.”

“We play in different tournaments around the country, and this is by far my favorite,” said Benedict. “Our manager, Steve Wolf, does an incredible job of putting the team together, getting everyone playing time and keeping the same guys together for the tournaments. When we get together, we just jell because we’ve done it so many times. Getting out here and playing ball makes you feel young again. Competition is a good thing to have in your life.”