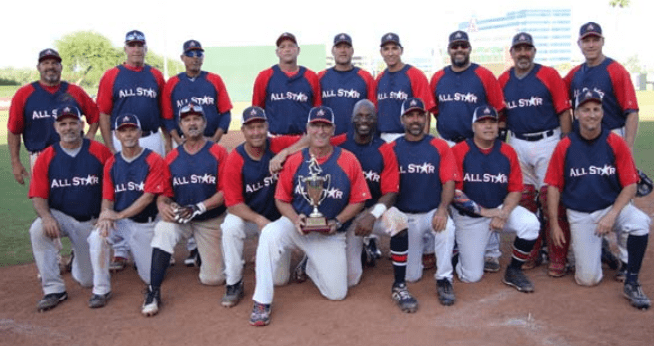 October 18, 2019, Tempe Diablo Stadium – The aptly named All-Stars lived up to their moniker in the 50 + Central Championship game. Fueled by 20 runs on 24 hits, the Philadelphia based club broke the game open with a five-run fourth inning to take a 10-2 lead. They didn’t stop there. Scoring in every inning except the fifth, the All-Stars piled up 20 runs with contributions from throughout the lineup. “I never imagined scoring 20 runs against this team, but everybody hit,” said manager John Stefanik.

The All Stars, led by Javier Barreto’s five hits and six RBI, saw seven players contribute at least two hits each. “Our hitting up and down the lineup has been terrific all tournament,” said Stefanik who was elected to the MSBL Hall of Fame earlier in the week. “I didn’t get one hit or score one run all tournament. It was all about these guys. We became a family and all gelled well together. It has been a magical tournament for me and I’ll never forget it.” 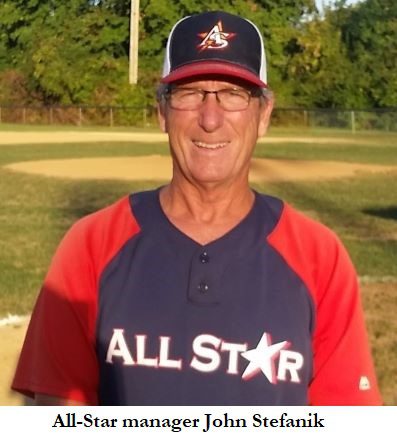 Dave Leven started on the mound for the All-Stars and struggled into the third inning before being lifted for Billy DeBoer who came on with the bases loaded and one out. DeBoer pitched his way out of the jam and then went on to go the rest of the way for the win.

The All-Star Baseball Academy went 5-1 in pool play and the So Cal Blue Jays were 4-2. In the playoffs, the All-Stars previewed their high-powered offense with a 22-5 win against the 3n2 Rangers. The Blue Jays outlasted the Raleigh Braves 7-5 in 14 innings.

Blue Jays manager Vincent Woods gave credit to Larry Brown who pitched twice against the defending champion Braves. “We wouldn’t be here if not for Larry who pitched 13 innings against the Braves yesterday.” Like many MSBL clubs, Woods says that his team is a family. “The majority of these guys have been together for 20 years—weddings, funerals and the whole thing…we stick together.”

“We don’t have an MVP,” said Stefanik. “Everybody contributed. We were hot all week and scored a lot of runs. That’s the thing. We all care about each other and it’s a beautiful thing.”

After all of the years coming to the MSBL World Series, this one was special for Stefanik. “This was the greatest moment in my coaching career,” he said.