October 18, 2019, Mesa, AZ – Start quick and end strong. Execute on defense. Play small ball. Throw strikes. From the opening pitch it was clear that MEZCAL had everything going against 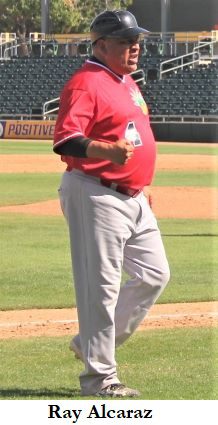 the Austin Angels at HoHoKam Stadium in the 32nd annual MSBL World Series. The Los Angeles-based team scored six runs in the top of the first and never trailed en route to a 21-8 championship in the 50 plus Cactus division. MEZCAL also won a championship last year.

Manager Ray Alcaraz summoned Tony Corona from the bullpen after starting pitcher Raul Viramontes gave up four runs in less than two innings. MEZCAL took a 7-4 lead after two innings, and put the game away with seven runs in the seventh and five more in the eighth. Corona struck out four, walked three and scattered nine hits during his extended relief appearance to finish the game. As part of its small ball strategy, MEZCAL (8-1) dropped down five SAC bunts. Timely hitting, plus an error free defense, led by shortstop Emilio Benavides, who normally plays third base, were other positives.

“Tony’s a beast,” Alcaraz said. “He threw in the semifinal and today. He threw close to 26 innings this week. I can’t say enough about Tony.” Corona had plenty of 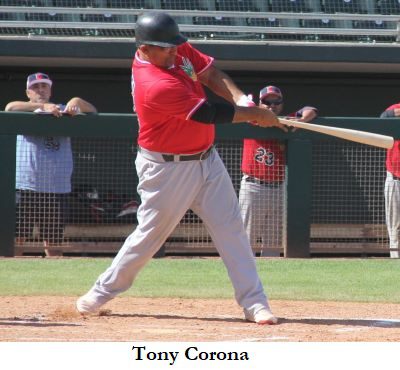 respect for the Angels, who finished 8-1.  “It was a very good team over there,” Corona said. “We pulled together. We knew we were going to have to bang with them the whole time. Everybody did their job. We played a little small ball and had some clutch hits. We know how to make the other team work and I think that’s the key to the whole game.”

Oscar Duran was named MVP. Duran was 2-3 with three RBI against Austin. “He hit all tournament, but every single guy on our team contributed,” Alcaraz said. “They are all versatile.” 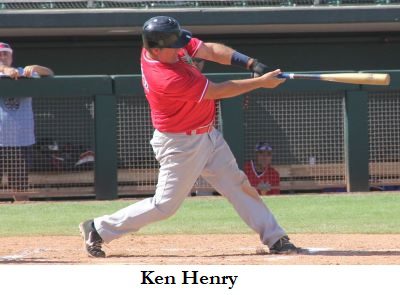 Benavides, who gobbled up numerous ground balls at shortstop, was a case in point. “I play third base,” Benavides said, “but today we needed a shortstop and I tried to do the best I can. We do the job. It feels good to win back-to-back.”  Corona, who was 3-3 with three RBI, agreed.  “We pride ourselves on defense,” he said. “Our baseball family is strong. We  believe in each other and don’t get down.”

MEXCAL got significant contributions from several players. Ken Henry was 2-3 with a double and three RBI, lead-off hitter Bobby Dominguez was 3-3, Mauricio Carillo was 3-5, Adolfo Paz was 2-4 with three RBI and Ernesto Perez was 2-2.

In its five-run eighth, Dominguez led off with a double, Duran had an RBI single, Carillo singled, Henry walked and Paz drove in two runs 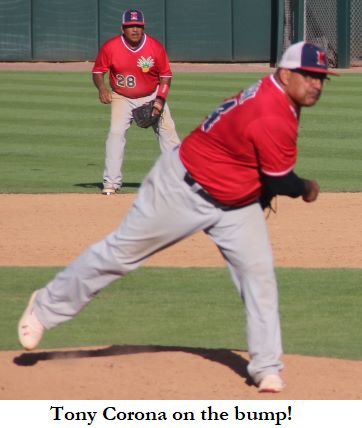 with a triple. The Angels also helped out with an error, one of seven they committed. Corona retired the last six Angels in order.

“There are no weak spots in our line up,” Alcaraz said. “We have great hitting, great defense and great pitching. We are going to go out to dinner and celebrate and soak it all in.”