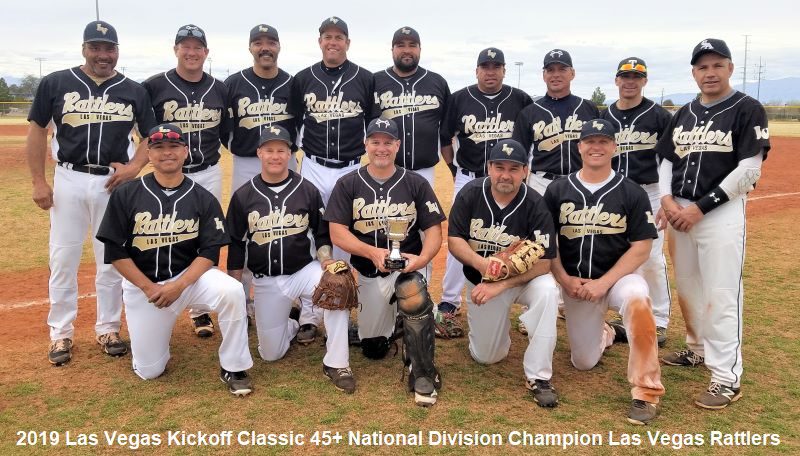 The normal, very short, Las Vegas Rattlers pre-game meeting consisted of a very short manager speech…”You know you all love each other, so go out and show it by having fun!” That’s what was said and embraced by a team of very relaxed, but ready to WORK HARD ball players.

Wearing Black and Vegas Gold, on the Saturday afternoon of March 09, 2019, our first pool game was against the So Cal Trojans, with known former Pro and College players and fearing no one! Dan Clemens was on the hill for the Rattlers, throwing the first five innings, hopefully to warm up for highly anticipated Championship game on Monday. The Rattlers showed their presence in the tournament with a 5-3 victory. 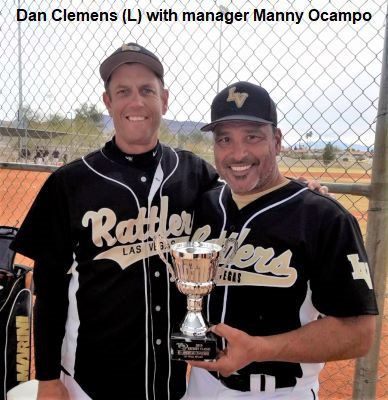 In game two of Pool Play against a very stacked Colorado Bandits team, it was a true slugfest, resulting in a 17-10 Rattlers win. Then on Sunday the Rattlers came from a deep hole to escape with an 11-9 victory over the Dallas Spirits. The Spirits held an 8-0 lead throughout the first half of the game. But our Rattlers have faced adversity in the past and came back from that eight-run deficit to defeat the Spirits, finishing Pool Play as the #1 Overall Seed of the 45+ Division teams, landing the Las Vegas Rattlers a #1 Seed in the National Division spot, reserved for the top four teams.

That Sunday afternoon in the playoffs the Rattlers faced the big hitting OC Dodgers team, featuring their very strong and effective pitcher “Mario” on the hill. The Rattlers countered with Greg Shepard, with Kim Fuerniss behind the plate. The challenge was on, as the Rattlers hit first and hit hard, scoring five runs the first few innings of the game. They held the Dodgers to only two runs as “Shep” went the complete game, sending the Rattlers to the National Division Championship game with a 6-2 win over the OC Dodgers.

Monday, March 11th, at Heritage Park in Henderson, Nevada, the Las Vegas Rattlers took on a youthful looking and very talented Hops team from Willamette Valley, Oregon. Dan Clemens took the hill for home team Rattlers. The Hops scored the first run with three hits in the first inning but the Rattlers bit back and tie the game in the bottom of the first.

After many innings of play with the Rattlers consistently leaving runners on base, it was difficult to cash in as balls were driven directly at Hops players. However, giving credit where credit is due, the Hops had an outstanding defense. (who was that Right Fielder???)

Clemens grew stronger every inning on the hill for the Rattlers as the Rattlers did all weekend, they finally put runs together, scoring five total and holding the Hops down to only one. With a final score of 5-1 the Las Vegas Rattlers took the tough 2019 MSBL National Division Title!

Congrats to Dan Clemens, who went all nine, with Kim Fuerniss behind the plate, Alfonso “Junior” Gandara at third, Mike Stader at short, Jim Rini at second, Javier Arias at first, Dave Scaringe in left, Anthony Arenz in center, Mike Ryan and John Vidal sharing right field and Big Greg Shepard as our reliable designated hitter. (one HBP, one walk and two stolen bases, then off to work after three innings of play…we won it for you Shep!).

I can’t tell you how proud I am of the above players and all of the Las Vegas Rattlers on the bench that helped us get to the finals!