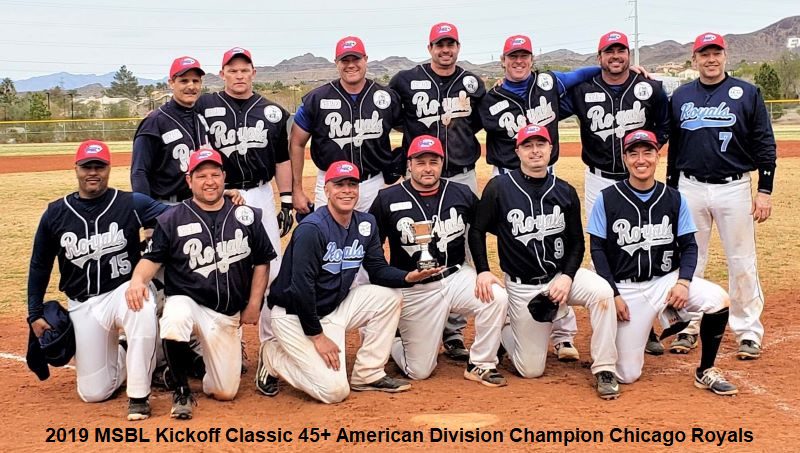 ‘Iron Man Trimarco Steps Up on the Bump’

The Chicago Royals overcame two severe injuries on their way to the MSBL Kickoff Classic 45+ American Division title. Shortstop Mark Cibrario was hit with a ball in game one and suffered a broken nose but returned for Monday’s semi-final and Championship games turning in stellar defense and solid hitting in the leadoff spot.

Second baseman Dennis Weiner was sorely missed after a collision in the semi’s resulting in a broken elbow but ‘Swiss Army’ Jose Sanchez stepped in. Jose started against the mighty Colorado Bandits in the championship game, who put up a 14 spot on the Royals Sunday. Sanchez dazzled, giving up just one earned run in five innings. The MVP of the tournament was Mike Trimarco who pitched all three days, going nine innings in the semi’s and the final four in the Championship.

Royals Manager Mike Torresso started the ninth inning with a base hit, took second on a wild pitch and third on an errant throw. After hot hitting Gerald Davis was walked intentionally, Jose Sanchez drove in the winning run on a fielder’s choice. Keith Otero and Rick Mallot each had an outstanding tournament.