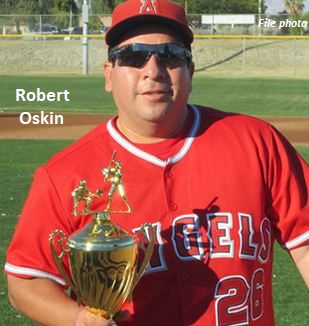 Once again, the Montebello Angels headed out to Las Vegas for the MSBL Las Vegas Open, finishing 2-1 in the round robin while losing our first game to the ever-tough Desert Pirates. On Sunday we barely beat a really good team from Mexico, 11-10 to get the second seed in the playoffs. After beating the Sultanes in the playoffs we had to once again go back and play the Desert Pirates for the championship.

Our starting pitcher Bobby Yanez thru a gem for 8 2/3 innings, holding them down to four runs. Cisco Vega came in the eighth for the close. The Desert Pirates definitely made it interesting, as they had bases loaded in the bottom of ninth with only one out and their number three hitter, Manny Pimental, representing the tying run at the plate. Vega got him to ground into a 4-6-3 double play to end the game.

It’s always great to play such a quality team as the Desert Pirates, as they have some really great ball players and know how to play the game right. We took a really good squad out to Vegas and overall the whole team did great. Frank Rodriguez, Joel Bustamante, Ivan Valencia and Brandon Hedding led the way for us with their constant heading. Plus, our work horse and savior Bobby Yanez pitched in three games total over the 3-day weekend.