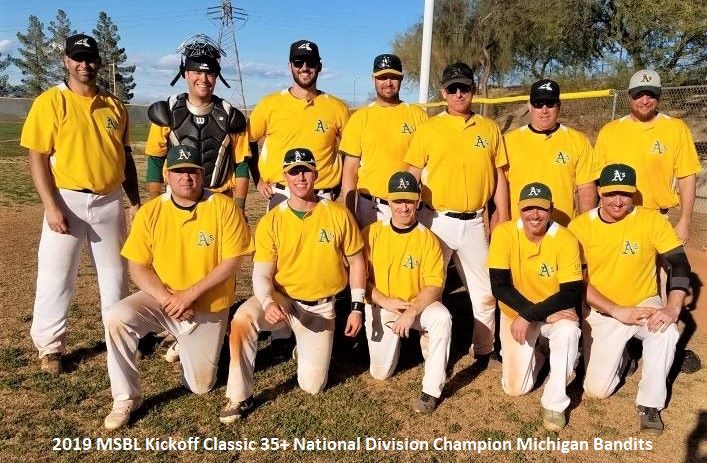 ‘Thorn, Bevis and Perez Lead Way on the Bump’

The Michigan Bandits compiled a 5-0 record on their way to winning the 35+ National Division of the 2019 Kickoff Classic in Las Vegas. Led by strong pitching and timely hitting the Bandits won their pool with a 3-0 record. In the semi-final game, the Bandits jumped out to a 5-0 lead in the first inning against the Las Vegas Rattlers. The Rattlers battled back to make it a 2-run game in the ninth inning before the Bandits were able to close out the 8-6 victory. Todd Thorn was outstanding on the mound for the Bandits in his first outing of the season. At one point, Thorn retired 14 straight Rattlers en-route to his complete game victory. Offensively, the Bandits were led by Keith Perez with three hits and PJ Bevis, Matt Brady and Paul Allen with two hits each.

In the championship game against the Montebello Angels, the Bandits gave up two runs in the top of the first inning but quickly responded with a 6-spot in the bottom half of the inning. Starting pitcher PJ Bevis went a gutty 5 1/3 innings to claim his second win of the 3-day tourney. Keith Perez came on in relief to record the final 11 outs (5 via strikeout) and secure the 13-11 victory.

The save for Perez went along with his win in the opening game of the tourney. Offensively, Nick Gaudi got the scoring started with a 2-run double in the first inning. Keith Perez, Mike Counihan and Barry Keith contributed three hits each, while Matt Brady added two more. Not to be lost in all of the pitching and offensive highlights, the Bandits also played good defense behind their pitchers and Matt Brady was solid behind the dish in both the semi-final and final games.