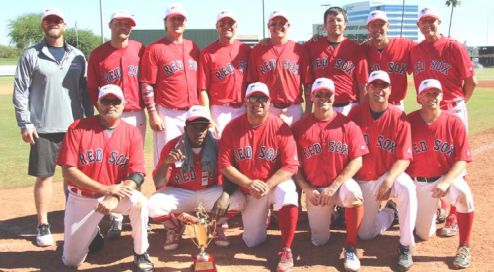 October 19, 2019, Tempe Diablo Stadium – Omaha dominated the tiny 35+ Mountain Division so a win in the championship game didn’t surprise anyone. “We had a team drop out right before the tournament so we only had three teams in the division,” explained Omaha Red Sox manager Kyle Kruska. Because of the small division, the championship game was the fourth meeting of the week between San Antonio and Omaha. The Red Sox had won two of the first three meetings and cruised to a 9-4 win in their fourth matchup to claim the title. 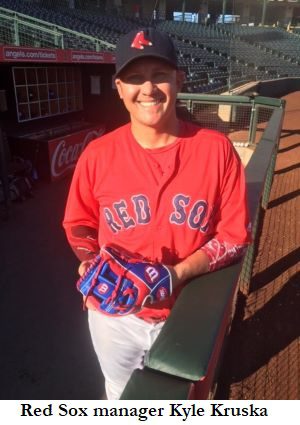 The Bombers scored single runs in the first and fourth innings with the help of a pair of errors. Bill Fredrick’s two-RBI double in the bottom of the fourth got the Red Sox even. In the fifth, Jason Grimm drove in a pair of runs to key a three-run inning and give Omaha the lead for good. A four-run sixth put the game out of reach. “It was a slow start for us, but we finally got our bats going and scored some runs,” said Kruska. Tom Belick went the distance on the mound striking out 10 for the win. Belick was named tournament MVP for the Red Sox after pitching 18 innings and winning twice in two days.

The Red Sox were 5-1 in pool play. In the playoffs Omaha knocked off Puget Sound 6-4. San Antonio was 2-4 in pool play but beat Puget Sound 4-3 in an elimination game. “With a team dropping out, pool play was more a matter of just staying healthy and getting ready for playoffs,” said San Antonio manager Kim Fuerniss. “I live in Las Vegas now, so I really enjoy coming here once a year to get together with all of these guys. That’s really what it is all about for me.”“We would have liked to have seen more teams in our division, but it was still a week of baseball in October. Any time we get to come down here and play baseball, we’re happy,” said Kruska.