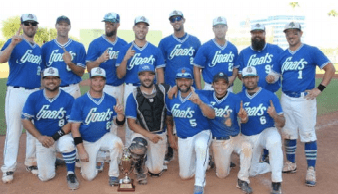 October 19, 2019, Tempe Diablo Stadium – Rose City (Portland) scored seven runs in the first two innings to jump out to the lead against Utah. They added seven more in a decisive fifth inning and cruised to a 16-5 win to put a bow on the 35+ Cactus Championship. 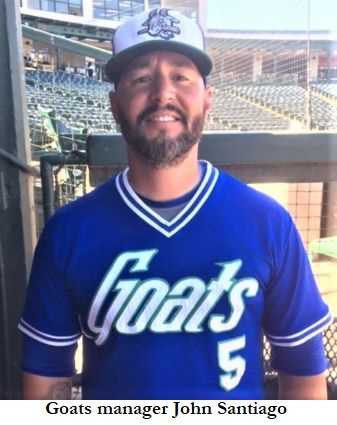 Utah jumped out to the lead with a first inning run on an RBI single by Freddy Martin. It didn’t last long. In the bottom half of the inning, the Goats struck back with four runs. Donnie Sixberry stroked a two-RBI single and Paul Ragglione followed up with a triple to drive in Sixberry. Sean Fennell knocked in Ragglione and the Goats were off to the races. Three more runs in the second gave them a commanding 7-1 lead. “It’s hard to compete with us when we get our bats going like we did today,” said Rose City manager John Santiago. “Our hitting is what really carried us through the tournament.” Ironically, it was leftfielder Jean McGovern who was named Tournament MVP on the strength of his defense.

Both teams had interesting runs to the finals. In pool play, Rose City was the division’s second seed with a 5-1 record while Utah was close at 4-2. Both teams had to scrap to win in the semifinals. It took Utah 12 innings to outlast Houston in an 11-9 battle. Rose City slipped past Minnesota 11-10 with a ninth inning walk-off. “We had some key pitching performances but it was really our hitting that got us through the tournament,” said Santiago.

Following ten years of trips to the World Series with no rings, the team changed its name from the Mets to the Goats. “Last year we decided to change it up,” 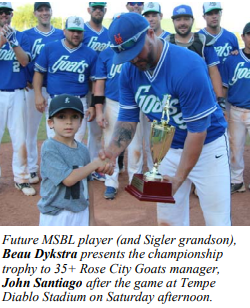 explained Santiago. “We liked the colors of the Hartford Yard Goats of the Eastern League. We hadn’t had success as the Mets, so we became the Goats and here we are.”

The team plays together in league play in Portland and hangs together at tournament time. “We’re all brothers and stay together,” said Santiago. “We rented two houses, go out together and have barbeques at each of the houses to create a camaraderie.” And the best cook on the team? “I’m going to give it to Shannon Chung,” laughed Santiago. “Chief the year…chicken and shrimp are his specialty.”

Utah manager Mark Garcia was making his first trip to the World Series with Utah. “I’d been out of the game for a little while, so it was great to get back in it with this bunch of guys,” said Garcia. “We all have each other’s backs.” The Dodgers are made up of players from several different locations (California, Utah, Washington) that gathered for the tournament. “Our guys really rose to the occasion,” said Garcia. “It has been a special experience playing on these fields with these guys and it is something I’ll always remember.”