Coming into the game, the Royals had scored 69 runs in four games. The starting pitcher was Zeke DeLeon who had faced many of the Pirates players in Arizona (World Series) and Florida (Fall Classic) when they played for the Barons and Cherokees respectively. Having won both of his starts against those groups, the lefty DeLeon carried much confidence onto the mound. Zeke started a bit rusty with it being early in the season and having had a long winter break. But Zeke managed to battle through four innings only allowing one run on one hit. The Royals knew Ted Pratt was the 2012, 2013, and 2014 pitcher for Atlanta on Fall Classic championship teams so the runs would be sparse. 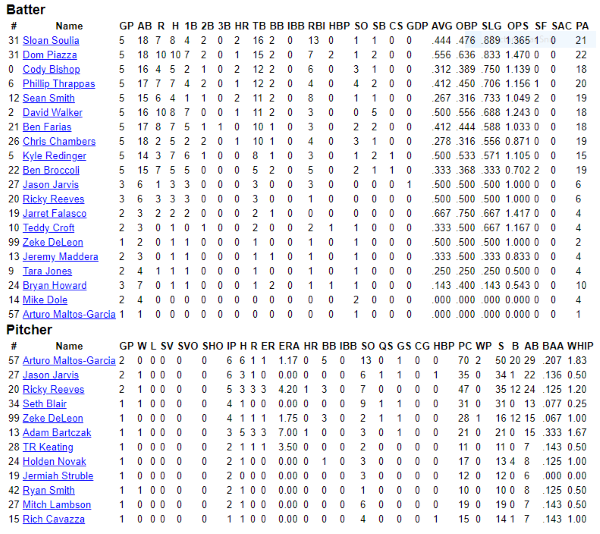 The Royals took advantage of Pratt’s early control issues and scored in the top of the first to take a 1 -0 lead. In the second inning, the Pirates returned the favor by scoring the lead-off walk to tie the game 1-1. Both teams stalled as the pitching began to tell the story. On the Royals side, Arturo Maltos-Garcia entered the game in the fifth and began to dominate the Pirates offense. On the Pirates side, Jamie Sexton relieved Pratt, and the West Georgia product again returned serve and kept the Royals silent until the tenth inning.

In the top of the tenth the Royals got two quick outs which brought Ben Farias to the plate. Ben battle deep into the count to finally drive a line drive to center field. Two pitches later Ben stole second base and put himself in scoring position. This put the game on the shoulders of David Walker. The left-handed batter drove a ball over the shortstop into the gap and scored Ben with the go-ahead run from second. The Royals ended the inning soon after but the damage was done.

In the bottom of the tenth the Pirates faced hard throwing Royals right-hander Ryan Smith. Smith was topping at 97 mph with a slider at 83 mph. The Pirates got the tying run on base with an error but stranded the runner at first to end the game.

The story of the game was the Sexton Garcia match-up for the five innings down the stretch. Both pitchers controlled the game and waited for someone to blink. Arturo, the ex-Cubs prospect, was topping out at 88 mph with a 12/6 curve at 80 mph.

The Royals had 16 players on their roster with pro experience and four more with college experience. The Royals also had a girl playing some outfield, with the ex-USA baseball product Tara Jones contributing as well.

Below is the YouTube link to the complete championship game video: