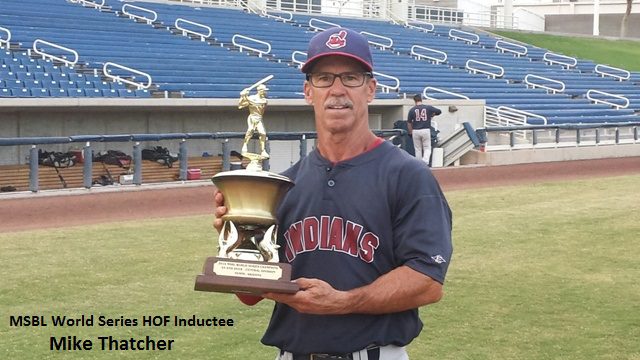 65 year ‘young’ Mike Thatcher is a Southern California World Series veteran sporting a display case full of rings, having established himself as one of the most respected competitors in the history of the MSBL World Series. As a result of his achievements in Arizona, MSBL Founder and President Steve Sigler has honored Mike with an induction into the 2018 class of the MSBL World Series Hall of Fame.

“I appreciate the recognition that goes along with this WS Hall of Fame induction,” stated Thatcher. “I would like to share this recognition with each and every MSBL teammate that I have had the honor to have sat next to on the bench over the past 26 years. I have had the time of my life playing baseball with all of you.”

Mike’s MSBL journey began in 1991 as a fill-in. “I was introduced to MSBL by my son’s Little League manager. He invited me to fill in and play in the last six games on his SoCal MSBL league team. After the first five games I was not having any success and was ready to retire from playing competitive baseball once and for all. Miraculously in my last game that season I had three hits, including a short porch home run. That one game got me hooked on MSBL and it changed my baseball life forever.”

Mike’s current MSBL league affiliation splits between playing for the 45+ Angels in the SoCal MSBL in Orange County and the 62+ North County Indians in the North County MSBL in San Diego. As impressive as his league accomplishments are in two very competitive leagues, his World Series resume is the real eye opener.

“I started playing in the MSBL World Series in the fall of 1992,” explained Thatcher. “The first two years in

Arizona I played on a league team that lost all 12 pool games, however I had the time of my life. In 1994 I was invited to Arizona by Glenn Marshall, Manager of the So Cal Astros 40’s, and won my first ring. For me to taste the playoffs for the first time and also win a ring was just awesome.”

To say that the Astros experience lit the pilot light is an understatement. “From then on I was no longer satisfied with just participating in the MSBL World Series. I wanted to experience the playoffs every year and fortunately I have participated in the playoffs 22 of the 26 years I have been there. It is difficult to win a championship at the MSBL World Series and Fall Classic and something I have never taken it for granted.”

Mike has had the good fortune to have been on some incredible teams that have won 18 championships in the Father/Son, 40+, 48+, 50+, 55+, and 60+ divisions. Mike now participates in the 65+ division and there is little doubt that his current LA Athletics team and their long history of dominance will add another ring and division to his collection. 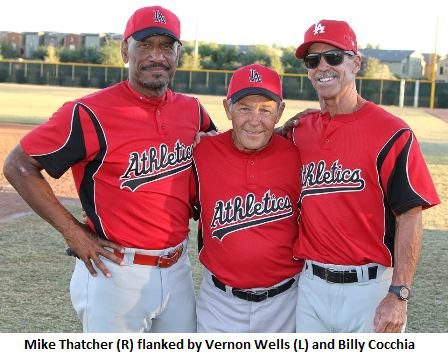 As if that wasn’t enough to justify Mike’s induction, “I also had the unique opportunity through MSBL to participate and win a gold medal in baseball at the 1998 Nike Masters Games in Portland Oregon. Tom Prendergast and MSBL organized and ran the baseball competition at these Masters games.” Thatcher went on to say, “I also played in and won another Gold Medal in baseball at the 2005 Masters Games held in Edmonton, Canada. I have also played in 25 MSBL tournaments in Las Vegas, San Diego and Palm Springs, winning 14 times.”

For those who know Mike, they understand that this isn’t bragging. It is a mere explanation of achievements and he just happens to possess the tools that help carve this amazing baseball legacy.

Mike has many highlights from his World Series career but one stands out. “It was in 1998, the inaugural year of the Father/Son division. To experience playing baseball with my son that first year and every other year my son and I played together was priceless. We played with the Sacramento Cardinals, managed by Jimmy Hill. We won the championship and my son Brian caught 45 innings. He was so drained after the seven games that he went back to school at Northern Arizona University and slept for a few days. The comradery with all the fathers and sons that first year was special.”

Many people have influenced Mike throughout the years. “First I would like to personally thank Steve Sigler for providing me an opportunity to play baseball and be a kid for a few hours a day while playing in a MSBL game. Steve and MSBL gave me the opportunity to meet and develop lifelong friendships that I never would have made if it were not for MSBL.

Thank you Val Lewis for having the foresight and starting the Father/Son division at the MSBL World Series. All of us that have participated in this division have memories of playing with our sons that we would not have experienced without you. My last bucket list entry is to play with my son, son in law and two grandsons in one game. I am ready to book a room for the 2029 MSBL F/S World Series!

I would also like to acknowledge my local MSBL league presidents, Dennis Swartout and Doug Johnson. Dennis 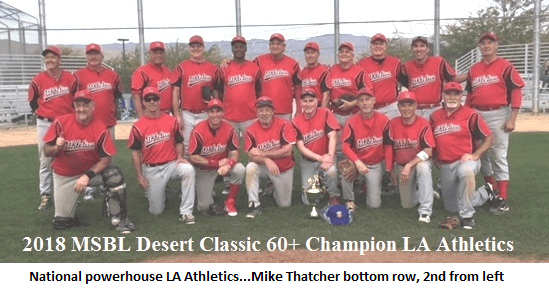 and Doug gave me a place to play every weekend.

Lastly I would like to extend my gratitude to Ken Chavez and Joe Soto of the Sacramento Tribe and Bob Sherwin of the LA Athletics for continually inviting me to play with their two successful and talented tournament teams.”

Last thoughts? “I am a firm believer that we all have only so many at bats or pitches left is these aging bodies. As I get closer to my last at bat I cherish the comradery with my teammates so much more than I did when this ride first started. I would like to memorialize my three teammates that I can no longer have an after game meal with- they had their last at bat way too soon – Darrell Thomas, Dale Hall and Dennis Viegas.