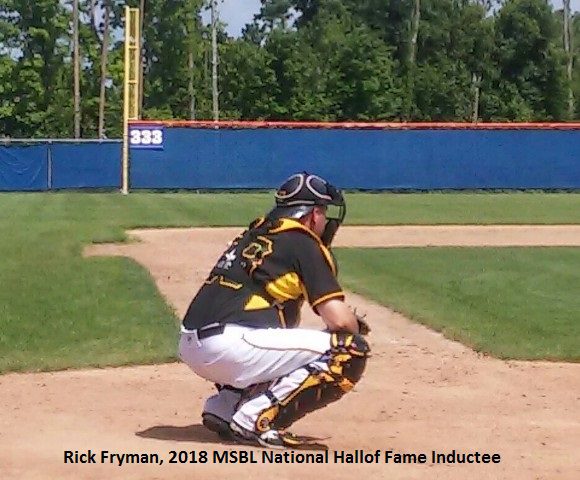 Rick Fryman heads up the Columbus MSBL, a fantastic league offering competition in 25+, 35+ and 45+ divisions. They are one of MSBL’s longest tenured leagues, having begun in 1988. Rick is 51 years old while continuing to play on the Pirates in the 25+ division. Rick started his MSBL baseball career back in 1995 in Dayton, Ohio with a stop in Philadelphia for a few years before settling in Columbus in 2000. In 2012 Rick took over the leadership role from long-time president Jim Durham. MSBL Founder and President Steve Sigler has recognized Rick’s dedication and leadership qualities and is honoring him with induction into the 2018 class of the MSBL National Hall of Fame.

“I believe the MSBL is an incredible organization that allows men of all ages to continue to play the great game of baseball,” stated Fryman. “Everyone is given opportunities to play in national tournaments in Arizona and Florida, along with other regional tournaments. We are very fortunate. It seems more friendships are built through the MSBL and to sit in the dugout on a Sunday for three hours and talk about all kinds of things is what makes it even better.”

Rick is a catcher and first baseman but has slowed down the on-field pace a little the past few years. “I caught for many years but those days are over. I play first base now but still strap on the tools once in a while to stay involved.”

Rick played college ball at Malone College in Canton, Ohio before finding MSBL in 1995. He is married to Celeste and has a daughter Karlee, who is 26 years old. Even with the presidential and family duties, Rick still finds time to attend an occasional national MSBL tournament. “I have played in six Fall Classics (1995-1999, 2014-2015) and four World Series (2009-2012). We are taking the 25+ Pirates this year in the Mountain division of the World Series in Arizona.”

Nobody ever makes this journey alone, of course. “I would like to thank Jim Durham, who was League President 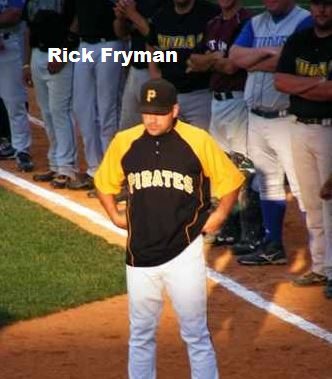 for 20+ years before I became President six seasons ago,” explained Fryman. “We worked very well together, as I was also League Secretary for five years while he was President. Also, I would like to thank my wife Celeste and my daughter Karlee for allowing me to continue to play the game of baseball. They both have endured long hours in the car traveling to games and at the fields.”

As a successful president of a successful league are there any words of wisdom to pass along to those who would like to take a stab at being a league president? “Stick to the bylaws and let them know there is a structure and implement it. Be in charge. Yes, there are always special circumstances but the players want to know someone is in charge so that all they worry about is playing ball. Give them that opportunity and gladly accept the responsibility.”

Steve Sigler obviously recognizes Rick’s abilities as a leader and hopefully others can learn from his experiences. “I told Steve Sigler I didn’t feel I deserved the award,” said Fryman. “He told me to trust his judgement. It is an honor to be inducted along with some others that have been involved with the MSBL for a lot longer than I have.” Remember, Rick, it is not the quantity of years but quality of leadership. Trust that others know full well what you bring to the table and are happy to recognize you. Well done!