44 year old Tim Lukowski lives in Omaha, Nebraska with his wife Amanda and son Tanner (18) and daughters Emma (14) and Morgan (11) and is the league president of the 12 team, long standing Omaha MSBL. The Omaha MSBL began in 1989 under the direction of MSBL Hall of Famer Bobby Suggs. “Bobby Suggs was our real forefather,” said Lukowski. “Bobby and my dad were Veterans and in the American Legion together. After coaching high school baseball Bobby invited me to play then to help him with the younger division. When he retired to Florida I was handed the League. Make no mistake, without Bobby the league would have never happened.”

heart beating in Omaha, MSBL Founder and President Steve Sigler has inducted Tim into the MSBL Honor Roll. “I’m a blessed man. I get to do some things I really love. And I have a great father who worked his butt off to let his sons play this great game. We all need to be stewards of what we do, not where we work. I have a blast playing Jack Buck and doing PA at my son’s Varsity games. Find the small joys and blessing and cherish them. It all ends way too quickly. I loved being a coach, changing young men’s lives in baseball, football, etc. I see them now and feel old, but we have that bond.”

Tim’s credentials as a ball player have earned him the right to pass along his knowledge both to players and as a league president. “I was a decent enough pitcher and had some call backs with the Cincinnati Reds and San Diego Padres and had my shot in college at the University of Nebraska-Omaha, but I now take great joy in being on my side of the fence,” explained Lukowski. “It sure seems like a long time ago. My greatest joy now is watching my kids. I’m not a “Glory Days” type of guy. I love seeing my kids being stewards of the game and treating it with respect.” 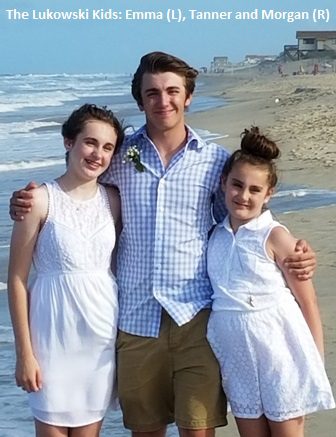 Tim continues to pitch with the 40+ Dodgers and Cowboys in the league and makes the occasional trip to Arizona for the MSBL World Series but he makes it very clear that helping his kids and being there for them far outweigh him having to be on the field. “I’ll make a cameo between select volleyball, varsity baseball and girls softball. I do it to show the guys that I can still wing it once in a while.”

As you might expect, when asked about Tim’s greatest moment

either on or off the field he deflected the spotlight from himself. “It goes back to my kids. Watching them work hard and sacrificing “free time” for the love of the game. I’ve tried to teach them never to get too high or low, be stoic and carry an inner pride.

My son has a gift, but he’s an even more amazing young man. The “Lukowski Cool” moment was this last season. On a guy trip, Tanner caught a foul ball at a White Sox game. A month later, after a 6-4-3 double play, Matt Carpenter flipped the ball to my daughter Emma, and then Morgan and Emma caught balls in a Diamond Back/Giants game. THAT was a pretty cool three months. Of course, I kept and framed the balls! That and winning a High School State Championship as a kid was pretty cool.”

Tim is a huge Cardinals fan and was actually named after Cardinal catcher and broadcaster Tim McCarver. “My 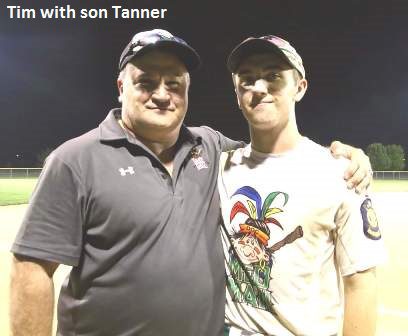 Dad named me after Tim McCarver, so I’ve been drawn to catchers. I met Mr. McCarver at a dinner and told him my father named me after him. He said, “Now why would he do that?” and laughed. I still have the picture.”

Final thoughts? “Omaha has an AMAZING amateur history. We host the College World Series and some of the men who grew up in Omaha/Lincoln/Council Bluffs went on to play pro ball or manage at very high levels. Our league continues to donate to the MSBL charities and help with various charities on a small scale in Omaha. Be it scholarship, Wounded Warriors or First Responders, it’s amazing to give back.”

Lukowski concluded, “In this day and age people take so much so seriously. This game is our common thread. We need to get out of the house, walk away from Twitter, Google, and all of the other distractions and get outside, compete, play or watch. Camaraderie is so rare. We’re all so quick to judge but so scared to take risk. The batter’s box, mound and middle infield is a risk. TAKE IT! You’ll make yourself happy.