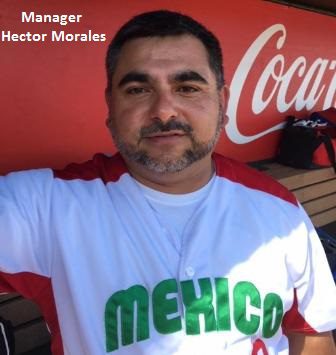 October 28, 2018, Diablo Stadium, Tempe, AZ–Team Mexico came from behind to score seven runs in the final three innings and defeat Kansas City in the 2018 Father-Son Federal title game at Tempe Diablo Stadium. The Athletics took the early lead in the second inning. T. J. Klawitter’s two-out single brought home his brother Ross.That proved to be the only run Kansas City could scratch out. For six innings, it looked as though it may be good enough. T.J. and Ross’ dad, Tom, shut out Mexico on one hit through four innings. T.J. followed his dad to the mound and added two more scoreless innings before the roof came down in the seventh.

With one out, singles by Rolando Zuniga and Florentino set the table. Klawitter nearly got out of the jam after striking out Christian Ayala but he couldn’t help himself in the field. A ball hit back to the pitcher resulted in a hit.  An error on the play allowed the first run of the game for Team Mexico to score. Daniel Florez followed with a two-run single and that would 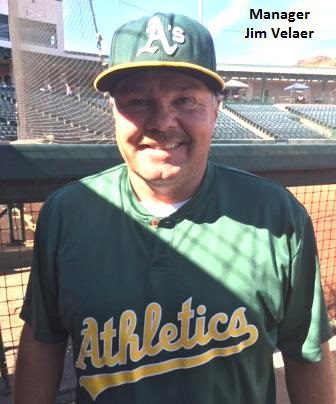 be enough. Filipe Hernandez pitched shutout ball the rest of the way. Team Mexico added two runs in both the eighth and ninth innings to pad the lead. After getting only two hits through the first six innings, they struck for 11 base knocks over the final three frames.

“This one was a real nail-bitter,” said Team Mexico manager Hector Morales. “We were down 1-0 but finally found a way to score some runs and break it open.” Felipe Hernandez pitched the final 4.2 innings and shut out the Athletics on three hits to earn the win. Hernandez was named the tournament MVP for his performance. For Team Mexico, the third time was the charm. The club had been to the finals each of the two previous years but come up empty. The team is made up of players from Chihuahua, Mexico and West Texas. Pool play took on a new meaning for this group. “We all stayed together at a big house and there was a pool,” said Morales. “The water 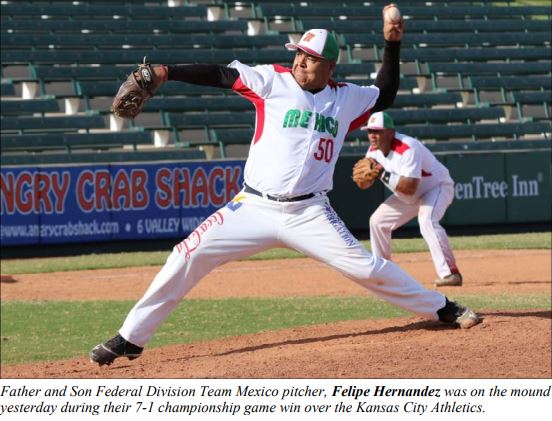 was cold but we were all excited about getting to the championship game so we just jumped in.”

For Kansas City manager Jim Velaer, it is all about the experience. “I’ve been coming here for 30 years in the different divisions,” said Velaer. With players ranging in age from 23 to 68, this tournament brings about some special memories. “I’ve been with some of these kids since they were in diapers,” said Velear. “This was a tough year for us with some of our key pitchers down with injuries, but these guys battled to the end.”

For Team Mexico, the tournament is about more than baseball. “We just like to have fun,” explained Morales. “We like to barbeque, eat and drink and play ball together. It is just a neat experience. The opportunity to play with

your own kid makes it special. We are going to go home with these rings, show them off and bring more teams with us to this tournament next year.”