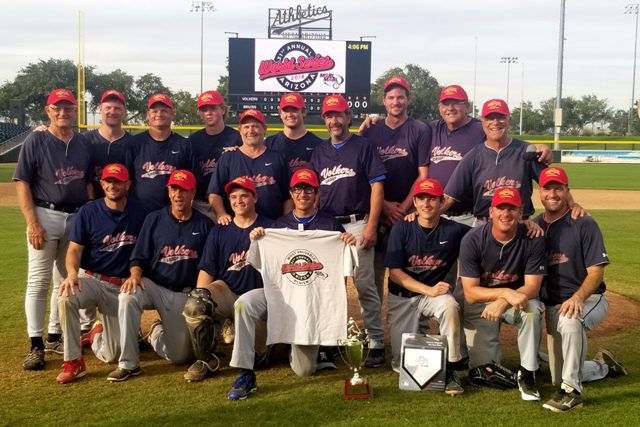 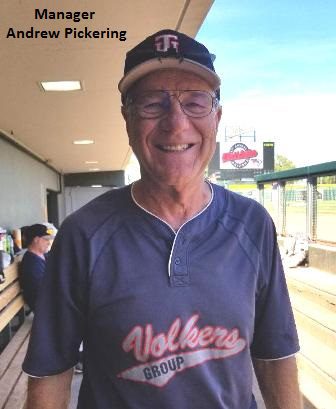 October 28, 2018, Hohokam Stadium, Mesa, AZ– It took every ounce of talent from three generations of families but the Terre Haute Volkers were able to hold off the Des Moines Bruins 7-4 in the Father/Son Cactus Division championship. Volkers team MVP and son Trevor Geltis reached base safely four times and drove in two runs in the ninth inning to put the game out of reach and helped the team maintain their lead in the middle innings with two game changing catches in left field.

“He’s a little bit quite and a little bashful but he plays a helluva game of baseball,” said Volkers manager Andrew Pickering. “He kept using his wrists and slapping the ball out there.”

The Bruins struck first when Chris Donohoe hit an RBI single in the first inning but Volkers battled back scoring three in the third led by an RBI double by Wade Bush. Volkers tacked on a couple of more runs in the middle innings and needed every bit of offense they got. 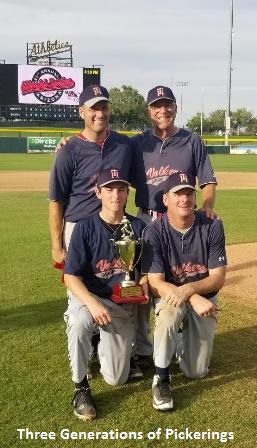 In the seventh inning the Bruins mounted a furious rally and cut the deficit to one. After Curt Lyons drove in two for the Bruins with a single the Volkers turned to son (and grandson) Casey Pickering on the mound. With the Bruins rallying C. Pickering was able to get out of the jam with the lead intact heading into the last two innings and slammed the door.

“I’m really proud of my grandson,” said A. Pickering. “He’s only 18 but always pitches so well for us. I wish I could send some coaches video.”

Despite falling the in the championship game the Bruins manager John Linden was proud of his team for their effort throughout the tournament.

“There is no quit in this team and I’m really proud of our guys,” said Linden. “All week up and down our lineup somebody was picking it up but it just didn’t happen today.”

Volkers brought three generations of ballplayers to the World Series this year. The experience of playing together is something they will all cherish forever.

“We started playing out here when we were in our 40s and I always said I wanted to play with my grandson who was one year old at the time,” said A. Pickering. “He’s been out here three years with us now and it’s just the best being able to play with him.”

The Volkers went 4-0 during pool play but it wasn’t easy. In the first game of the tournament they were able to overcome seven errors in the first two innings battle back from a 9-5 deficit. Additionally, Volkers won two other games by one run making them battle tested heading into the playoffs.

Donohoe’s clutch hitting. In the first game of pool play Tanner Linden had a walkoff hit in Tempe Diablo Stadium to get the team rolling towards their undefeated campaign.

straight hits against Team Corona to clinch a spot in the championship game with an 8-3 victory.

In a rematch of the first game of pool play the Bruins defeated the Texas Wolfpack 9-5 to advance to the championship game.