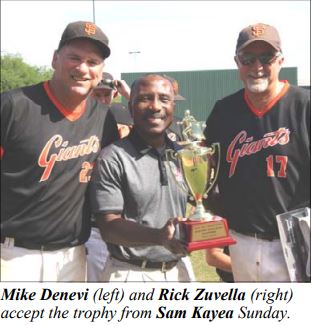 October 28, 2018, Diablo Stadium, Tempe, AZ– Don Chambers relay throw in the eighth inning nipped Francisco Fonseca at the plate to cut down the tying run as the Giants hung on to beat Sonora 4-3.  The play helped San Jose claim the 2018 Father-Son American title at the MSBL World Series. The initial throw was a perfect peg from leftfielder Hayden Hibbard to Chambers who unloaded to get the runner at home.

San Jose opened the scoring in the first inning on an RBI single by Nick Caravelli. In the top of the second, they pushed the lead by another run on a leadoff home run by Hayden Hibbard. On a 0-1 pitch, Hibbard deposited a fastball over the leftfield fence to make it 2-0. The lead didn’t last long. In the bottom of the inning, with one out, Andres Munoz doubled and Ramon Apodaca tripled him home. With two out, Rafael Nunez walked and Francisco Fonseca Jr. topped a ball in front of the plate. He beat out an infield single to load the bases. His dad, Francisco Sr. followed with a two-RBI single to give Sonora a 3-2 lead.

The Giants got even in the fourth on an RBI single by Rich Zuvella. The game stayed that way until the sixth when with the help of two Sonora errors San Jose forged ahead. Chris Chambers scored on the second miscue to make it 4-3. That set up the heroics for Chambers’ dad whose eighth inning throw preserved the lead and the win.  Chris was selected at tournament MVP for the Giants. 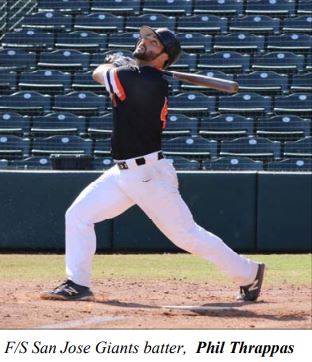 there (pointing to the leftfield berm), explained Giants Co-Manager Mike Denevi. “We have a whole team of MVPs,” continued Denevi. “We all love each other…this is the best thing ever.” Championships are nothing new to Denevi. For the MSBL Hall of Famer, this was his 17th ring. With all of the rings, the Father-Son Championships may be his most important. “These are really special. My son and my nephew are on this team, but these guys are all like my sons,” said Denevi. “This is my favorite division.”

Sonora’s team is made up of players from the Los Angeles, CA and Phoenix, AZ areas. Like San Jose, Sonora came through pool play with a perfect 4-0 record. Sonora shut out CA Capitols 5-0 and San Jose beat the So Cal Quakers 6-2 in the semifinals.

Giants co-manager Rich Zuvella says that the father-son experience is what makes this tournament special to him. “We all come down here together, go out to dinner together and just hang out together.” The gap between oldest player on the team and the youngest is nearly 50 years.  Co-Manager Mike Denevi is the oldest at 65 and the youngest player is 16-year-old Nick Yandle. “Mike and I really promote team

camaraderie and having each other’s back,” said Zuvella. “We carry that attitude on and off the field. We are a family.”

For the Giants Family, this was their third consecutive Father-Son title. They now have an 18-game winning streak in MSBL World Series play. To go along with it, they have yet another family heirloom—the 2018 championship ring.