By Rick Arbogast, special to MSBL 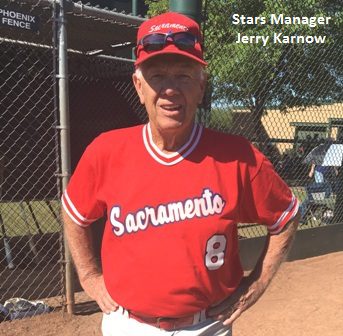 October 27, 2018, Tempe Diablo Field #1, Temp, AZ….The game started well for the South Dakota Rushmore’s as they pushed two runners across in the top of the first inning. Mike Spratt and Paul Smith started things off with consecutive singles while number three hitter Joe Bonaquista put down a beautiful sacrifice bunt moving both runners up. Howard Bich and Nick Pashulka then recorded RBI singles. Coach John Larson of the Rushmore’s stated, “It’s fun to watch these ballplayers hit the ball.”

In the bottom half of the first the Stars from Sacramento got a man to second but was picked off by pitcher Phil Clements to end the inning (Clements pitched a complete 9-inning game against a good Virgin Island team earlier in the day in their semi-final win). The Stars had their chances again in the second as Lanny Ropke hit one in the gap and tried to turn it into a double but was thrown out on a close play. Nick Pashulka then made 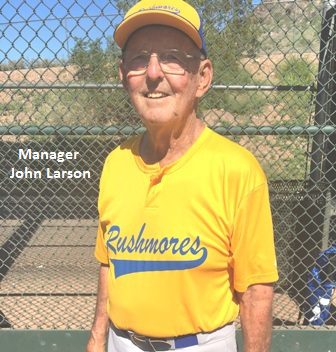 a fine running shoestring catch in center field off the bat of Harry Hart. With two outs the next two batters walked and a single by Dave Sutherland loaded the bases. Carl Epple then hit a hard line drive that was caught by the left fielder to end the threat.

Both teams continued to play great defense and held each other off the board until the fifth inning. Stars coach Jerry Karnow, who has been coming to Arizona since 1988, stated, “the key to our team is that we practice twice a week on fundamentals.” In the top half of the fifth, South Dakota scored EV Bradshaw from third on a bases loaded walk to Doug Stormo after he led off the inning with a single. That was the last batter that pitcher Irv Scott would face as Denny Brown took over. That gave South Dakota a four run cushion. In the bottom half of the fifth the Stars were able to get on the scoreboard as Epple scored on an RBI single by Irv Scott to get them to within three. 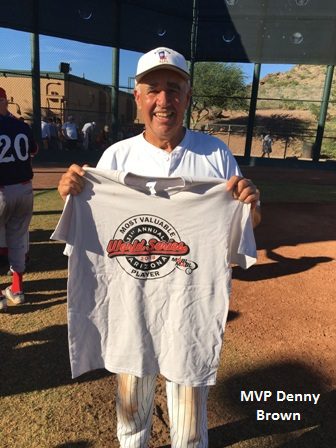 In the pivotal seventh inning the Stars Epple got things started. With one out he laid down a bunt for a single. After a rare error in center field the Stars had four consecutive singles by Ray Newman, Scott, Brown and Ropke with Newman and Ropke picking up an RBI and Brown adding two RBI’s. After pitching 6 1/3 innings in this game and a total of 15 1/3 for the day the Rushmore’s Clements was replaced by Mike Spratt who gave up an RBI single to Ropke before getting the final two outs. At the end of seven the Stars were up one run 5 to 4. The Stars added an insurance run in the eighth to complete the scoring.

Winning pitcher Brown was named the MVP as he delivered 4 1/3 innings of shutout ball and went 2 for 3 at the plate with a walk and two RBI’s. He said, “we outlasted them. In the ninth inning they had the bottom of the order coming up so we didn’t have to see Mike Spratt.” 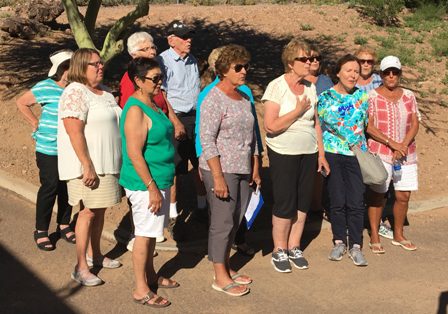 ninth inning, 5-4. Coach Karnow stated, “we beat two great teams coming from behind, two beautiful games. Denny Brown was instrumental in recruiting some of our players and then he played tremendous ball on the infield, relieved on the mound and is a terrific hitter.”

the Ballgame” and “God Bless America.” The players and umpires stood with their hats off in honor of our great Country.