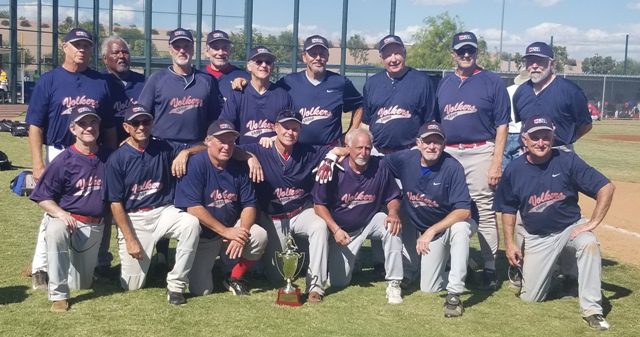 October 20, 2018, Riverview, Mesa, Ariz. – With the team’s heartbeat, Mark Adams, sitting in the stands due to a medical issue the USA Volkers were able scratch out a win in 13 innings against the scrappy San Diego Berry’s in the 70 National Championship at Riverview. Jeff Blatt hit a walkoff single to left field to drive in Fred Krause from second base for the win. 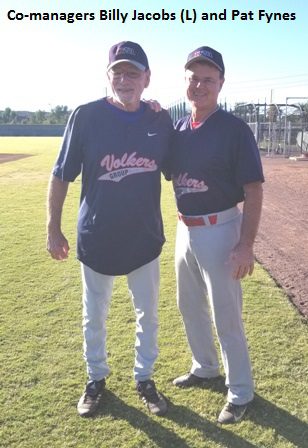 During the first inning of the first game of pool play Volkers starting shortstop Adams walked off the field hunched over. Teammate Marse McNaughton, who is a doctor, tended to Adams and determined he was experiencing a heart attack. He was rushed to the emergency room and within 24 hours Adams had three stents placed.

“Mark is the heart and soul of our team and the nicest guy,” said Volkers co-manager Billy Jacobs. “He’s the last guy you would expect to have a heart attack and it’s a warning for everyone. He’s dying to play but had he played he would have died.”

The Volkers came out swinging against Berry’s starting pitcher and Vietnam veteran John Hopkins. The first six batters for the Volkers reached base and Berry’s went to their bullpen bringing in Jim Teeter to get out of the jam. When the dust settled in the first inning the Volkers were ahead 5-1 with Fred Krause leading the charge with an RBI double.

Berry’s battled back by chipping away at the deficit scoring two runs in the third inning on an RBI single by Marshall Gibbs and an RBI double from manager Jack Valentine. Valentine, a former drummer and member of Motley Crue before they shot to stardom, said the team’s confidence was at a very high level despite entering

the playoffs as underdogs. That confidence seemed to play a role early on when Berry’s needed to dig themselves out of an early hole.

“We are all just so confident right now,” said Valentine. “There are guys on this team that would kick over a checkers table if they didn’t win a game because they are so competitive and I don’t hold them back from it a bit.”

Gibbs, but the lead was short lived. In the bottom of the sixth inning Volkers tied the game at seven when Steve Brye scored on an error by the left fielder.

The teams remained knotted up until the bottom of the 13th inning when Blatt singled home Krause to walk it off for Volkers.

Pool Play – Berry’s struggled to a 1-4 record during pool play with their only win coming against the TV Antiques in the opener. Valentine led the team with five RBI in pool play.

During pool play the Volkers went 4-1 earning them the second seed in the playoffs. Throughout the tournament Sal Calcagno played fantastic defense at shortstop after taking over the position for Adams when he suffered a heart attack in the first game.

In the semifinals Volkers defeated the Red Deer Legends 13-5. With the score 6-5 in the eighth inning Volkers scored seven runs to seal the victory and secure a spot in the championship game.