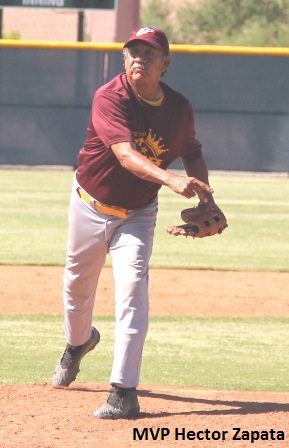 October 20, 2018, Mesa, AZ…In a three-hour game that was never in question, an undefeated Indiana team took on a motivated Texas squad in the 31st annual MSBL World Series. Hector Zapata made sure he had an impact. Zapata, the MVP, pitched the final five innings to earn the win and collected two hits as the El Paso SunKings beat the Terre Haute Volkers 23-11 in the 70 plus Central championship game at Riverview Park in Mesa.

El Paso’s win, which gave them a 7-1 record, avenged an earlier loss to Terre Haute in pool play action. Zapata had plenty of help. Jesus Munoz was 5-6 with two doubles and Francisco Ramirez, the SunKings’ lead-off hitter, contributed three hits, including a triple, and five RBI. Zapata relieved Abel Hernandez, who pitched four innings and gave up five runs.

Arturo Martinez, the SunKings’ slick-fielding shortstop, said it took El Paso a long time to get a team together to compete in the 70 plus age bracket. “But finally we said let’s give it a chance,” Martinez said. It was worth the wait. “Our defense really helped us a lot. At the beginning of 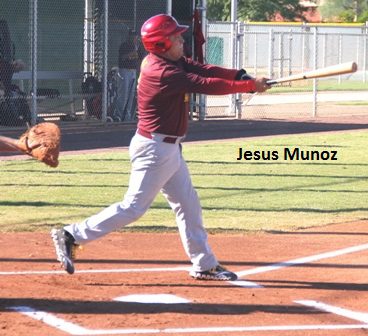 the tournament we made a few mental errors, but we adjusted after the first few games.”

Juan Zaragoza, El Paso’s manager, was 2-2, scored four runs and knocked in two before removing himself in the seventh. He was proud of his players. “Both pitchers were hurting,” Zaragoza said, “but they never gave up. It was all heart.” 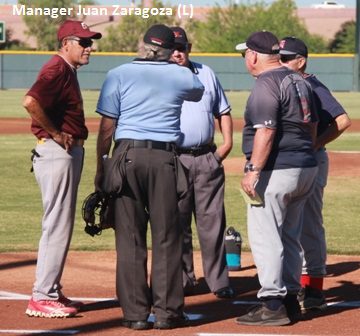 The 23-run explosion, the manager noted, was pay back. “They scored 17 runs on us the first game,” Zaragoza said. “This was a little bit of revenge.”

El Paso had four extra base hits after the fifth inning, but earlier in the game that wasn’t the case. The SunKings purposely employed a “small ball” strategy by bunting three times during a five-run fourth inning to take a 7-2 lead.

Martinez began the fourth with a bunt single down the third base line, Zapata executed a SAC bunt, and Refugio Portillo dropped down another well-placed bunt single. Zaragoza was hit by a pitch, Bill Juen walked and the next four batters (Ramirez, Rudy Carrasco, Munoz, and Mario Dominguez) singled.

In the third inning, the SunKings had two SAC bunts (Carrasco and Natividad Acosta). The bunts helped the 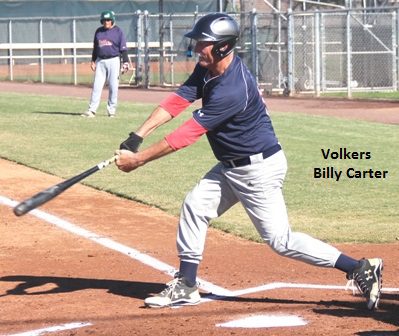 Texans score two runs. After his team took a few photographs with the championship trophy, Zaragoza said it was all part of the plan. “The first game they bunted on us a lot and messed up our pitching,” he said. “So we reversed the game on them. That’s why we bunted. Everybody wanted to bunt and it worked.” Juen had his biggest game of the week. He was 3-3 with three RBI and three runs scored. Dominguez was 3-5.

Billy Carter, who pitched into the fourth, took the loss for the Volkers, who finished the week 6-1. Terre Haute was led at the plate by Dave